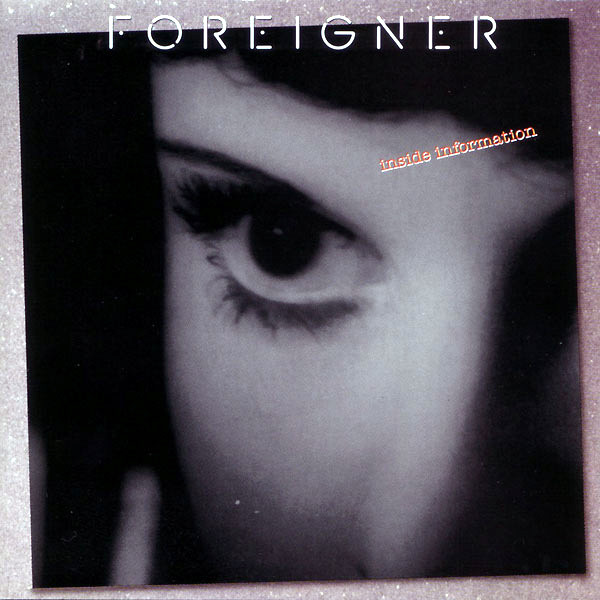 Psst… Looking for Foreigner’s most underrated album? Here it is.

Apparently,” said the troll, plucking a barktooth cigar from his yellow teeth and inviting a momentary halo, “I’ve been misinformed.” Of course, the troll often feigns a more urbane posture when the satyr stays with us, and the satyr always ambles in when Foreigner’s pheromone-laden music hits the wind. I feed my crusty friend’s now-amiable nature with a nod of assent and an “Mm-hmm.”

Inside Information usually merits a dual dialogue from both sides of the mouth, cool praise with more buts than a dog track ashtray. And so it’s a mystery why Agent Provocateur is assigned a higher position in the foreigner office, since this is easily its equal. Peter-John Vettese, last seen in the company of an incognito Ian Anderson (Under Wraps), brings the same bag of tricks along, though the heavy lifting is done by the core four.

Sorry, I’ve gone too far afield and the satyr is clearing his throat. He’s right; I’ve forgotten to mention that Inside Information rocks. “Counting Every Minute,” “Heart Turns To Stone,” “The Beat of My Heart,” “A Night To Remember,” they’re songs only a satyr could love. The album has a softer side as well, from the authentic emotion of “Say You Will” to the by-now obligatory ballad “I Don’t Want To Live Without You.” (I know, they’re right next to each other, so it’s hardly a flea’s leap to effect a from/to prepositional phrase.)

In an unfortunate twist, it appears some of the singles were remixed (foolish, fidgety fingers given too-free reign). I wouldn’t read too much into that, since the album versions sound just fine to us. (Now that the satyr’s stepped out of the room momentarily, I’ll mention that the lyrics aren’t up to Gramm’s usual crackerjack standards.) Outside of the cranky ranks of critics, Inside Information is powerful stuff, so if you’ve made it this far in your travels, don’t stop now. (“Yes,” I answer the satyr, “I’ll let you borrow my copy if you wipe your hooves next time.”)

All songs written by Mick Jones and Lou Gramm unless noted.