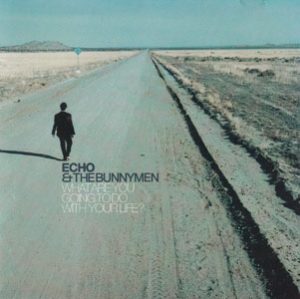 Kronomyth 9.0: IAN & THE BUNNYMAN. This followup to Evergreen is actually an Ian McCulloch solo album in disguise, so I’ll dock it an imaginary star for roughly using the Bunnyname and then tell you this is the best thing he’s done since Candleland. At times, WAYGTDWYL sounds like Bono fronting The Smiths, which is a secret fantasy we’ve all probably indulged in at some point. It is handily the most tuneful album in the band’s formal discography, even if it is something of a stowaway.  Purists may protest the demotion of guitarist Will Sergeant to a bit player, and I’ll agree that he’s criminally underutilized on this album, but what else was he doing with his life and isn’t this a better album for having him on it? For years, I wished that Ian and the band would lighten up a little and follow the footsteps of The Cure, and I got my Wish with WAYGTDWYL. Although the record could be considered slight by modern CD standards (9 songs, under 40 minutes), there’s a not a bad song on it. From the opening track, Ian and his acoustic guitar rise like the dawn of a new Bunnymorn (yes, I just like doing that) and from there it’s pure sunshine: “Rust” (with shades of Morrissey’s lazy sunbathers), “Get In The Car,” “Baby Rain.” Even when it’s only Ian and an acoustic piano (“History Chimes”), WAYGTDWYL is never a downer. What you won’t find here is any of the old Doors’ portentousness (it actually is a word, albeit an ugly one), though Ian does romp through strawberry fields on “When It All Blows Over.” And despite the assertion by some that the album is a return to classic Echo & The Bunnymen, only one song (“Lost On You”) invites the comparison. Rather, this is a return to Candleland in a bunnysuit that, quickly doffed, reveals Ian McCulloch with a richer voice and a lighter musical touch. The songs themselves deal with sometimes dark emotions (lost love, lost innocence) as Ian finds himself at the crossroads of middle age, but if the next forty years are going to be this tuneful I’d say he’s headed in the right direction.

The Cast
Ian McCulloch (vocals & guitars) and Will Sergeant (guitars) are the band proper at this point. Les Pattinson’s mum was sick at the time, so he didn’t join them the studio, although he does play bass on “Fools Like Us” (which was recorded earlier). The rest of the lot are hired hands  including Mark Taylor (keyboards), Guy Pratt (bass), Jeremy Stacey (drums except on tracks 4 & 7), Michael Lee (drums on tracks 4 & 7), Harry Morgan (percussion) and Paul Williams (backing vocals). The London Metropolitan Orchestra plays strings, woodwind & brass, with Nick Ingman handling the string arrangements on tracks 1, 2, 4 & 7 and Ed Shearmur providing the string arrangement on track 9. The album was produced by Echo & The Bunnymen (likely just Ian at this point) and mixing engineer Alan Douglas, and recorded in The Doghouse (a studio owned by ex-Tull drummer Barriemore Barlow, for those of you who insist there must be a prog connection to everything on this site).

The History
The CD was on April 16, 1999 in the UK (Polygram, 556080) and the US (London, 31066-2). The album peaked at #21 on the UK charts. Andrew Douglas shot the cover photographs, Kevin Westenberg shot the inner photos of Ian and Will. The album was designed by Stylorouge.