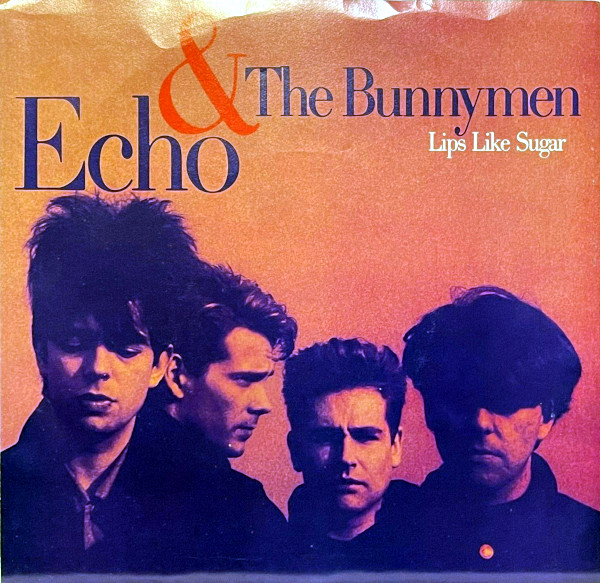 From Ocean Rain to Knight Rider in one horrific bunnyhop.

The lack of obvious melodies (as opposed to an obvious lack of melodies) and their abject failure to capitalize on the medium of music videos were the cardinal sins that kept Echo & The Bunnymen from the commercial canonization that The Cure and U2 enjoyed. In their defense, “Lips Like Sugar” was so catchy that it even caught the attention of David Hasselhoff, who recorded a surprisingly spot-on version with A Flock of Seagulls many years later. Seven degrees of Kevin Bacon? I give you two degrees of Hasselhoff.

As if to atone for their commercial grab, the band includes what appears to be a holdover from Ocean Rain (or a leftover from the early aborted sessions for Echo & The Bunnymen) on the flip side, “Rollercoaster.” The raw production from Gil Norton and the band ends up sounding more like Iggy Pop than the gloomy gossamer of Ocean Rain, but it’s a welcome departure—one of those surprises that reminded you the Bunnymen could mix things up when the mood struck them.

The music video for “Lips Like Sugar,” directed by photographer Anton Corbijn, didn’t make a lick of sense. Ian gets the spotlight while the rest of the band gets giant planets put on their head, which admittedly is a step up from the rolly-polly fishheads and penguin costumes of “Seven Seas.” I think Corbijn had it out for the rest of the band.

The 12-inch singles featured the band’s contribution to The Lost Boys soundtrack, “People Are Strange,” and various remixes of “Lips Like Sugar.” Produced by Ray Manzarek himself, “People Are Strange” isn’t appreciably different than the original version by The Doors, more homage than decollage. I haven’t heard the remixes since, you know, time and everything.

Original 12-inch single version
A1. Lips Like Sugar
A2. Rollercoaster
B1. People Are Strange