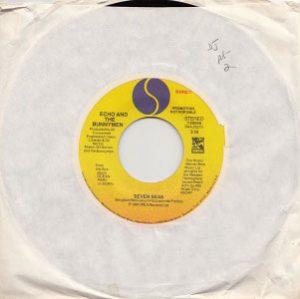 Bunnymyth 4.2: OCEAN REIGN. The third of three UK Top 20 singles from Ocean Rain, “Seven Seas” is one of the brighter entries on their iridescent and indigo masterpiece. I’ve never been able to unlock the song’s meaning, though I suspect it has something to do with heading out on the road (on tour?) when you’re feeling blue. The flip side is a bonus cover of The Beatles’ “All You Need Is Love” that adds some additional lightness to the oft-melancholy bunnymien. The UK extended singles included a few tracks that, like Love, were recorded live for the Play At Home program. If you’re interested in the silly side of the Bunnymen, there’s a lip-synched performance of this song from Top of the Pops featuring Pete de Freitas in a penguin costume and what one can only hope is not Will Sergeant in a fish costume.