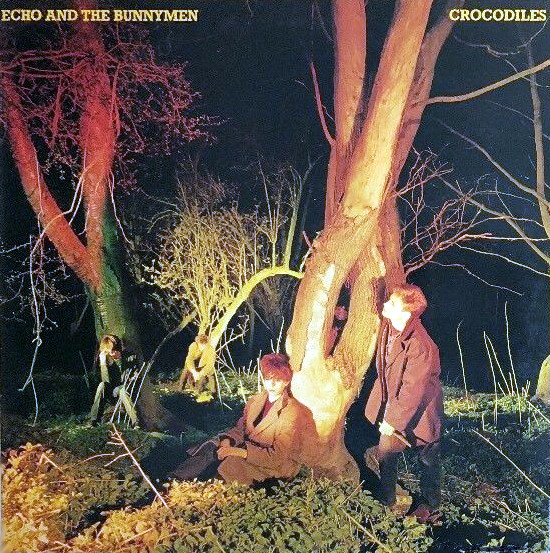 Some babies are born with a full head of hair, and some bands emerge fully formed on their first album. It’s rare, but it does happen sometimes. Case in point, Crocodiles. This album is a complete realization of the Echo & The Bunnymen sound: the driving rhythms, punkadelic guitars and Ian’s harrowing voice atop it all. The Cure and The Psychedelic Furs both sacrificed at least one album to the dying gods of punk. The Bunnymen appear to have contained their sacrifice to a single song, “Simple Stuff,” which appeared as the B side to “Rescue” and sounds uncannily like Iggy Pop. Over time, McCulloch’s charismatic and commanding presence would draw frequent comparisons to Jim Morrison, but other American bands such as The Stooges, Television and Talking Heads seem to have been as much of an influence in the early going. Anyway, those influences were quickly assimilated and sublimated into the gloomy, post-psychedelic world of Crocodiles. And this really is its own world, arriving as it does out of the void on the opening “Going Up” to announce a frightening new “Heaven” (the Talking Heads track being the operative reference point) where the former psychedelic virtues of peace and love have been traded in for angst and fear. This startling introduction is followed by the brilliant “Stars Are Stars,” in which The Bunnymen declare that youthful dreams are dead, and then offer their own dark dreams as a kind of inverted idealism. I won’t bore you with a song-by-song description of the album; they all follow the same basic tension-release model, with the band building tension as they pit the preternaturally tight rhythm section of Les Pattinson and Pete De Freitas against the supernatural shapes of McCulloch’s voice and Will Sergeant’s guitar, and then releasing that tension in the chorus. This formula works extremely well on the single “Rescue,” as Ian casts his cries of a drowning man into a pool party invitation. As David Fricke pointed out in his very insightful review of this album, Echo and The Bunnymen have adopted the musical ideals of the 60s psychedelic movement while refuting its philosophies, a point made plainest in “Villiers Terrace,” where the drug culture is painted in black. The same might be said of the band in general; they have rejected the past’s technicolor rainbow and retained only the indigo (a color that seems to come up often as I listen to them). All of that said, this isn’t music made in a vacuum. PiL, Gang of Four, Siouxsie and The Banshees, U2, The Cure, The Psychedelic Furs and many others (including the aforementioned American bands) were creating similar music. But Echo’s world is uniquely its own, and Crocodiles is the perfect prototype of that world; everything after is simply a refinement of what you’ll find here. Note that the original version of Crocodiles featured a free single (“Do It Clean” b/w “Read It In Books”), with those two tracks appended to the elpee proper for the delayed American release. An expanded, remastered edition to commemorate the band’s 25th anniversary included several bonus tracks as well as the full contents of the live EP, Shine So Hard.

* These songs only appeared on the US release.

All songs written by Echo and The Bunnymen.