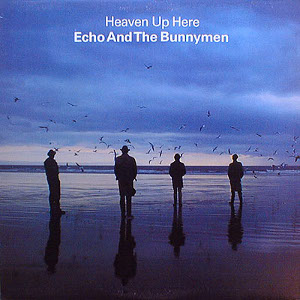 Kronomyth 2.0: MY BLUE HEAVEN. Not a little slice of heaven, but rather a lush and lurid limbo (or is it zimbo?) where the self-crucified Mac hangs like a puppet, frozen in time, frozen by self-analysis, refracting the sounds around him in brilliant opacity. Their first album, Crocodiles, was remarkable for its maturity and vision. But this album manages, miraculously, to imbue that vision with a whole new level of musical and lyrical detail. There are so many profound and indelible moments on here. Hold me tight to the logical limit. Did you say knowledge? Did you say prayer? Did you say anything? You could fill a book with what is said and what is implied on Heaven Up Here. And that’s true of the best of art: it doesn’t answer questions, it invites them. Their first album followed a kind of formula, a tension-release with everything pinned on the pummeling rhythm section. Here, in this Limbo, everyone is allowed to follow their own ghosts. Sometimes, the bass is barely a whisper; other times, the guitar seems to exist in a haunted, parallel universe. It’s a lot to take in, and listeners may find it unduly difficult in the beginning (I know I did). But Heaven Up Here is an album that deeply rewards study. Listen to it with headphones on. Listen to it with the lyric sheet in your lap. Listen to how Echo & The Bunnymen stop time on “Turquoise Days” or carry you along on dark waves of joy with “A Promise.” Lyrically, the theme of heaven reappears on this album, but this is no more a traditional Heaven than what Talking Heads imagined earlier. It’s boobytrapped with our own desires, fettered by our own failed ideals of freedom, crashing in a cacophony of sound as the conscious and subconscious collide. And, yes, it’s beautiful, the way that the burned image of the sun in our mind is beautiful as a dark mirror of the world. And maybe that is Heaven: a reverse image of what we experience in this world. In which case, Ian and the Bunnymen had it right all along.

The Players
Pete de Freitas, Ian McCulloch, Les Pattinson and Will Sergeant. The album was produced by Hugh Jones in association with The Bunnymen.

The Pictures
The cover photo was taken by Brian Griffin and the album was designed by Martyn Atkins.