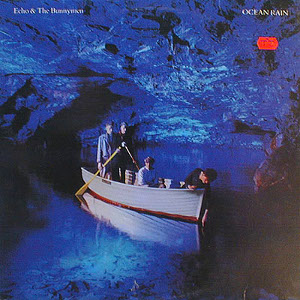 The beauty of writing a review of Ocean Rain lies in the entrance. Do you start by painting the whole piece in gothic indigo? Allude to the optimism and resolve that runs through the work like a silver stream? Get incensed over the sweet-smelling oblations to The Doors? Or shall you compare it to a full moon on a crisp autumn night? Honestly, there’s no wrong way to approach Ocean Rain. It is a luminous work from a band that rarely took its records lightly. Ian McCulloch has never been so endearing, engaging, so eagerly engorged by the listener. This more accessible McCulloch will immediately strike some as a Bono soundalike (the two were the product of the same inspiration and generation), and in fact the richer sound of Ocean Rain does push it into U2’s terrain, all of which detracts nothing from the Bunnymen. Porcupine had presumably been leading up to this, and Ocean Rain is far more psychedelicate than U2’s work to date. On the gothic cuts (“Nocturnal Me,” “The Yo Yo Man,” “The Killing Moon”), the more valid reference point may be Dave Vanian and The Damned anyway. In the final mix, Will Sergeant’s guitars (often acoustic) share space with strings, allowing McCulloch’s voice to rise above the usual fray. Only a few tracks, notably “Crystal Days,” hinge on Sergeant’s electric guitar. Though it generated several big UK hits (“The Killing Moon,” “Silver,” “Seven Seas”), it’s the consistently high quality of the whole album that makes Ocean Rain so winning. Only “Thorn of Crowns,” which smacks of Iggy Pop’s ravings, could be considered inessential. Given the band’s previously prickly work, Ocean Rain is as melodic and accessible an album as Echo & The Bunnymen have released. Many consider it their best work, myself included. If you’re a fan of U2 or The Damned but have yet to bump into the Bunnymen, get your feet wet with Ocean Rain.

The Players
Pete de Freitas, Ian McCulloch, Les Pattinson and Will Sergeant. Adam Peters provided orchestral arrangements, piano & solo cello. The album was engineered by Henri Lonstan and Gil Norton, mixed by Norton and The Bunnymen, and produced by all concerned.

The Plastic
Originally released on April 1984 on elpee and cassette in the UK (Korova, KODE8), in the US (Sire, 25084), in Germany (Korova, 240 388) and in Japan (Pioneer/Warner, P-9195). The elpees originally came with a picture inner sleeve. The album was re-released on digitally remastered CD with eight bonus tracks on January 27, 2004 in the US (Rhino, 61165). The album reached #4 on the UK charts and #87 on the US charts. Like previous albums, the artwork was photographed by Brian Griffin and designed by Martyn Atkins.