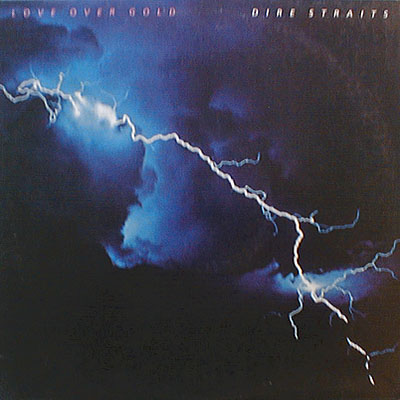 The moody fourth album sounds like someone had been listening to Pink Floyd’s Animals too much.

Kronomyth 4.0: The desire of gold is not for gold, but freedom.

And then there was… the enigmatic Love Over Gold. It couldn’t be less concerned with singles, generating a great one anyway in “Industrial Disease,” but otherwise oblivious to the album that preceded it. Mark Knopler had nothing but time, time to climb the wall and fuss over the final cut, which has occasioned AMG to call this “their prog-rock effort.” While it isn’t a prog-rock record, it is as close as they’ve come to making a Pink Floyd record, moody and murky soundscapes punctuated by pungent guitar and overcast with dark lyrical subject matter.

If Dire Straits were on a mission to write great rock songs, Making Movies completed that mission, allowing the band to make a mystical, long-in-the-tooth, black hole of a record with Love Over Gold. As such, the album shares a kinship with The Final Cut, Volume 4, Tales From Topographic Oceans and all the other self-indulgent antiheroes. Yet, in another sense, this is their Aja: sophisticated and unhurried, sober and sometimes sad. The title track especially, which features Mike Mainieri on vibes and/or marimba (I can’t tell the difference), has a Steely resolve to it.

The torpid pacing of Gold carried over to Alchemy, so maybe the Straits were in their Blue Phase. It’s a phase that radio listeners missed, although fans snatched it up. “Industrial Disease” and, later, “Twisting By The Pool” were silly, upbeat songs that showed little of the deep-running dark currents at work on Love Over Gold. While it may have given the record execs fits, Gold strikes a blow for the band’s principles and confirms that Dire Straits were more interested in making music than making money.

All songs composed by Mark Knopfler.