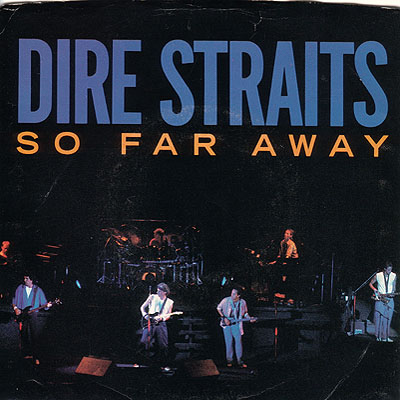 This long-distance lovers’ lament made for a sneaky advance single from the multiplatinum Brothers In Arms.

Kronomyth 6.1: Far and away my most honest review yet.

It’s the singles information that’s getting lost. I was reminded of that when www.45s.com, one of the last great singles resources on the web, went down. Mind you, bands like Dire Straits needn’t worry, as there are plenty of people willing to carry the torch. (For example, there’s great information on Dutch Dire Straits releases at www.markknopfler.net*). [*Scratch that. Looks like the Dutch ditched that site and now there’s some weird image with the words “Mark Knopler” on it. So much for my torch theory.] But pulling it all together is a chore (one I’ve elected to undertake in my spare moments), and presenting it in its proper, non-profitable context a challenge.

Doing this for free is something I wrestle with, not because of any desire to profit from it, but because of my desire to allow other writers to profit by their work. Freelance writers know that the writer’s market has been undermined by well-intentioned, intelligent people who write for next to nothing (or in some cases nothing). In an accidental way, my site (and every other site that contains unpaid musical criticism) bleeds the body of legitimate musical criticism (i.e., paid musical criticism). Not that the field wasn’t the poor, starving, bastard child of literature to begin with, but there are some genuinely good music writers out there.

I am not one of them. A good critic exposes the technical aspects of the music (even those unseen by the original authors), interviews the authors to obtain reliable information about intent, and plots its course on the great graph of yesterday, today & tomorrow. And, honestly, this only needs to be done once if it’s done right (allowing for minor adjustments as tomorrow changes). I don’t do any of this. I don’t understand the technical aspects of the music and am no more inclined to use language like “interloping fifths” in describing music than I would be to use “mons pubis” during the course of passionate lovemaking. I don’t interview artists because, from everything I’ve read, they don’t like it. My lone contribution is in helping the real critics plot the Great Graph by assembling release dates.

Thus we come to “So Far Away,” of which I have nothing to say.