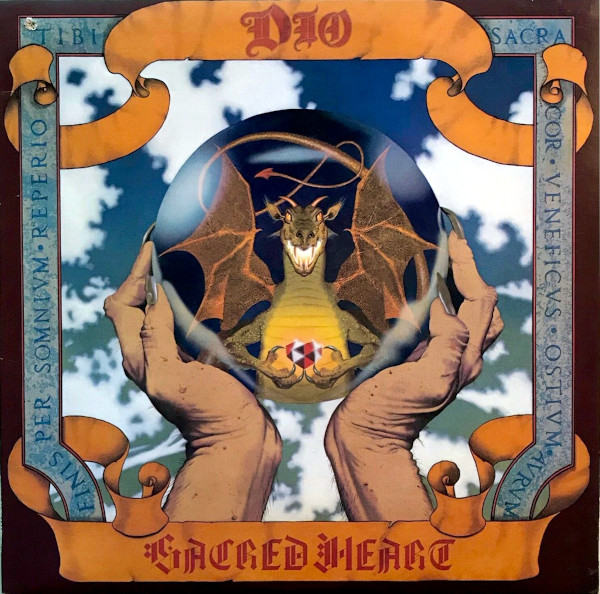 How much does an album have to rock to make you forget there’s a smiling dragon on the cover? This much.

A crone’s hand holding a crystal ball holding a dragon holding a heart-shaped ruby? The 8th level half-elf cleric in me weeps for what was. I’m all for the devils & dragons imagery, don’t get me wrong, so long as the dragons aren’t telling me to follow my dreams. That, I believe, is the province of Dragon Tales.

This creeping cynicism isn’t something I felt on the first two albums. And let me be perfectly clear: Sacred Heart is just a notch below Holy Diver and The Last in Line in terms of heavy metal awesomeness. Ronnie James Dio is still a great songwriter. Vivian Campbell is still one of metal’s elite guitarists. Jimmy Bain and Vinny Appice remain battle-sharpened stormtroopers. I’ve even got to give Claude Schnell props on this album. But there are a few moments on Sacred Heart, albeit brief, where Dio feels like a band going through the motions.

Every Dio album starts out with a readymade concert favorite and King of Rock and Roll is no exception. It’s a great song; so great, in fact, that it doesn’t need the piped-in crowd noise to pump you up. The result feels contrived, and it’s one of several examples where Sacred Heart seems like manufactured (versus organic) evil. The epic title track is also a worthy classic, though I would have expected this as the album closer in keeping with their first two records. It’s on tracks like this where the keyboards are (finally) fully integrated into the arrangements. Another Lie and Rock ‘n’ Roll Children, both credited to Ronnie James Dio, are highly melodic for metal, which is a compliment and not a criticism. I don’t think Ronnie got enough credit for being a complete (and very talented) songwriter.

A few more cracks appear on the second side, all of which are ably filled by Vivian Campbell’s typically sterling guitar work. Hungry for Heaven is a highlight, and I’d nominate Like the Beat of a Heart for best guitar solo on the album. The closing Shoot Shoot, however, might be the worst Dio song to date, at least in terms of its message. (Remember, 1985 was the year that two teenagers shot themselves in the head, purportedly because of a Judas Priest song.) On the first two albums, Dio’s “rainbow in the dark” persona seemed more light than dark, but Sacred Heart can’t seem to decide whether it’s hopeful or hell-full. Much of the time, it feels like a dark record contending with its own conflicted heart.

As the last of the Vivian Campbell albums, Sacred Heart is still classic mid-eighties metal. That said, you won’t encounter it in any of the Top 500 metal album lists, mostly because Holy Diver and Last in Line are superior and earlier versions of the same formula. All of those lists are bunkum, though. If I ever find myself so bored, I’ll create a Top 500 or 1,000 somethings that represent a band’s best periods. So, instead of agonizing over whether Holy Diver or Last in Line is the better album (fool’s work for certain), I would combine the first three albums under the banner of “The Last Sacred Diver” and point listeners to those records, then let the numberers decide whether it deserves to be ranked higher or lower than “Blizzard of a Madman.”