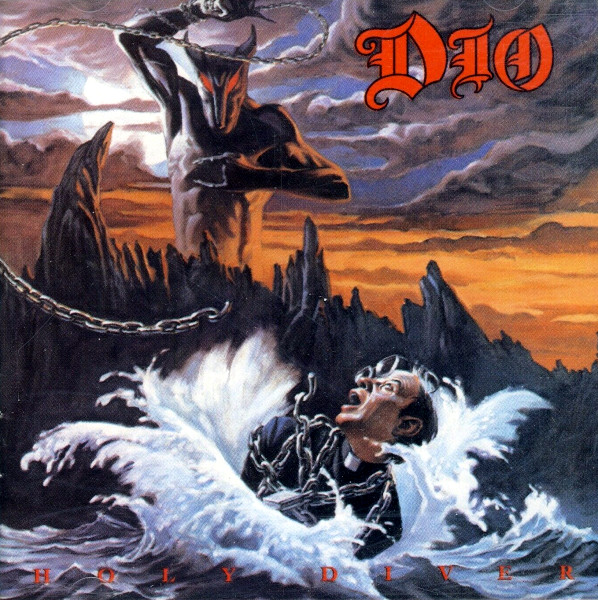 Ageless metal from an ageless man, forged in a bygone age of demons and wizards.

Kronomyth 1.0: Truly, a rainbow in the dark.

Heaven and Hell was a very good album. Holy Diver is a great album. The debut of Dio introduced the melodic heavy metal of its namesake and a new hero in the pantheon of guitar gods, Vivian Campbell. Campbell was just 21 when this album was recorded. Ronnie James Dio was 41. But age is nothing but a number, while classic metal like this is ageless.

Ozzy Osbourne, the obvious precedent for a solo career by an ex-Black Sabbath lead singer, was already on the decline when Dio ventured out on his own. The death of Randy Rhoads, of course, had a lot to do with that decline. Dio, Campbell, veteran bass player Jimmy Bain (ex-Rainbow) and Vinny Appice (ex-Black Sabbath) offered heavy metal fans new hope. Holy Diver and the albums that followed influenced a new generation of headbangers, from Anthrax to Guns N’ Roses. Dio’s songs were mystical, magical, melodic and, most of all, heavy metal at its finest.

“Holy Diver is one of the best f*cking albums of all time…. That’s kind of the perfect record.” – Foo Fighters’ Dave Grohl, in a 2019 interview.

You’d be hard pressed to think of a better opening track than Stand Up and Shout. (Deep Purple’s “Speed King.” Okay, so it wasn’t that hard to think of.) The young guns, Appice and Campbell, come out with guns a-blazin’ while the old guys slog through the ranks of mediocre metal bands with their battle-sharpened skills. The next track, Holy Diver, begins with a hushed introduction before it explodes into more molten metal. The tiger reference in the lyrics is a little, er, unicorny (Survivor has pretty much ruined the image of the tiger for eternity), but the song totally rocks. Gypsy is another great track, with Dio singing at a lower register for a darker edge. “You got a choice / The hammer or the nail” is also an awesome line. Caught in the Middle is a good example of Dio’s melodic side, which I’ve always enjoyed. Ronnie James Dio was never afraid to mix light and dark; perhaps he was caught in the middle himself. The song also has a neat groove to it, something that seems to come up consistently on the songs where Appice receives a writing credit. Don’t Talk to Strangers, I song I used to like when I was younger, sounds merely okay these days, but that could just be me becoming jaded after four straight songs of unquestionably classic metal.

Straight Through the Heart is another track that probably wouldn’t come up in a conversation of Dio’s best, although Campbell’s performance is well worth hearing. Invisible is one of the album’s sleepers: the sort of song that a teenager could really relate to, with another great rhythm behind it. That sets up the stage for the album’s highlight, Rainbow in the Dark. Over a long career, this is the song I most identify with Ronnie. It’s hopeful, it’s heavy, it’s so good that even a cheesy 80s synthesizer couldn’t kill the beast. The album closes on an epic note with Shame on the Night. Forget about rock music, this song is a boulder.

The material on Holy Diver, written mostly by Dio and Bain, is remarkably solid and right in line with the new wave of heavy metal. The synergy and the energy is amazing; not surprising considering that Ronnie is a supernatural sparkplug and he had already developed a chemistry with Appice and Bain. What I didn’t expect from this album was the excellent engineering and production. You don’t usually think of heavy metal in terms of production value, yet Holy Diver is one of the best sounding albums from the early 80s. At least in my opinion, with the caveat that the first half of the 80s wasn’t the golden age of anything.

Holy Diver still turns up on a lot of “best metal album of all time” lists. Rolling Stone ranked it #16. I’ve seen it called the best metal album of 1983 (and wouldn’t disagree with that assessment). All by way of saying that if you have an ounce of metal in you and don’t own Holy Diver yet, you need to get kraken.