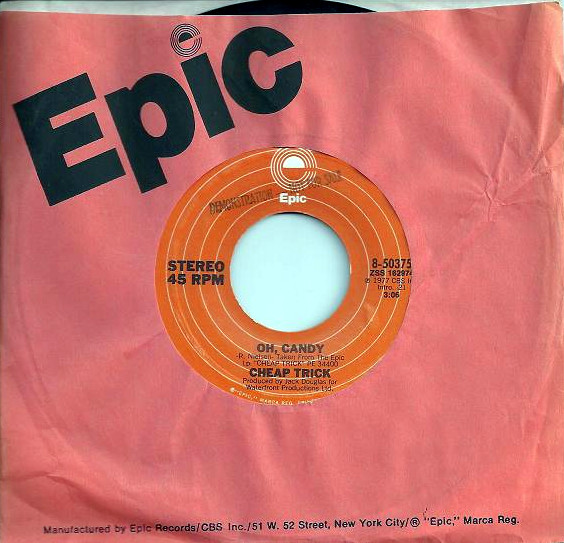 A song about suicide was probably dead on arrival, even with handclaps and new vocals.

The two songs most suited for a breakout single from Cheap Trick’s first record are “He’s a Whore” and Oh, Candy. So, do you pick the song about suicide or the one that will almost certainly get censored before it even hits the turntable? That was the dilemma that Epic faced in 1977. They chose the lesser of two evils, suicide, since moving to Australia wasn’t an option.

“Oh, Candy” is an awesome song even if it is a downer. I always thought it was written about a girl, but it’s actually about the suicide of a friend, Marshall Mintz (you can read more about it on Wikipedia). The tricked-out single version is not the same as the elpee version; handclaps are added as well as a new lead vocal track and some extra elements not in the original mix. You can also read more about that at Wikipedia. Sigh.

I don’t know if the B side, Daddy Should Have Stayed in High School, is the original elpee version or a different mix, and Wikipedia is surprisingly silent on the matter. The subject this time is an older man interested in younger girls, which is a roundabout way of saying “pedophile.” Every time I type a word like that on a site called Progrography, an SEO angel loses its wings. And you’ll think I’m kidding, but for years a Google search on “progrography” would return a link to an article that referenced “child progrography.”

I don’t recall ever hearing “Oh, Candy” on the radio. Of course, this was at a time when people still winced when they heard the word “bitch” on Hall & Oates’ “Rich Girl.” So, folks probably weren’t ready for songs about suicides and sex perverts. And as for keeping the whores out? It turns out they were with us all along.