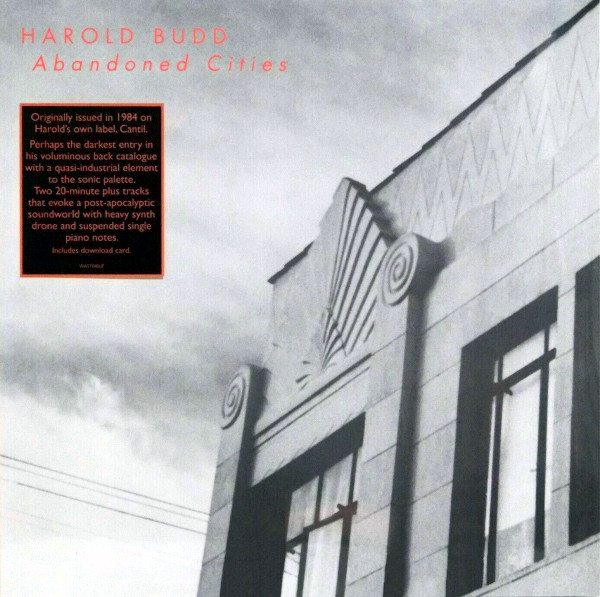 Kronomyth 5.0: A world without objects is a sensible emptiness.

On December 8 of 2020, time stopped for Harold Budd—a fitting if inevitable end for an artist whose work had the unique quality of suspending the passage of time. When I listen to The Pearl or The Plateaux of Mirror, time disappears and what is left is a space filled by sound. Only after the last strands of sound dissipate do I realize that ten, twenty or forty minutes have passed. I might on occasion lament the lost time spent listening to Klaus Schulze, but never so with Budd because that time never existed.

Abandoned Cities was originally released in 1984 on Budd’s own Cantil Records (which takes its name from the Californian settlement in the Mojave Desert). It marks a departure from his previous work, exploring synthesizers in a somber landscape of sound that will immediately remind listeners of David Bowie and Brian Eno’s dark Teutonic adventures (cf. “Warszawa”), albeit in a minimalist setting. The album contains two songs, although “song” is clearly the wrong word. Rather, they are two obelisks of sound, immovable and casting a tall, dark shadow over the listener’s mind.

Dark Star is a duet of synthesizer and guitar (courtesy of frequent Budd collaborator Eugene Bowen) that lives in the shadows of Warszawa’s creeping decay. Or think Fripp & Eno in frozen blacklight. A single synthesizer drone underpins the entire piece, while sounds rise and quickly fall, unable to escape their own doomed estate. As a fan of Richard Wilbur, I’ve never forgotten the line “A world without objects is a sensible emptiness.” Budd has captured the essence of that here. In the absence of linear progression or structural division, the listener is forced to contemplate nothing, to make the discovery that nothing is indeed something.

Abandoned Cities brings Budd’s familiar, soft, fuzzy piano notes back into the picture. A single doomed synthesizer drone still provides the foundation for Budd’s fallen landscape, but the piano notes suggest light reflected on the dark, gray surface. The Bowie-Eno references remain; this may be the most “European” album that Harold Budd has ever made, at least in its ability to evoke post-war Europe’s beauty and history entombed. There are more shapes to be glimpsed in the darkness this time, including a synthesizer that for a moment rumbles like a jet engine. A few environmental sounds also slip in—maybe a chair shuffling, a sniff—that might have been edited out. They serve as an unsettling reminder that this foreboding music, as remote as it sounds, is actually quite intimate.

Abandoned Cities is an atypical work, yes, but equally relevant in Harold Budd’s evolution as an artist. And perhaps a curiosity to explore darker, synthetic constructs was inevitable given his associations with Eno and the ambient movement in general. Earlier albums have felt like exploring a series of crystal-lined caves. This album feels like entering two dark, massive caverns of sound. I’d recommend both kinds of ventures if you’re set on investigating the musical world that Harold Budd left behind.

Design and layout by Paula Bethsebe. Photo by Matthew Budd.