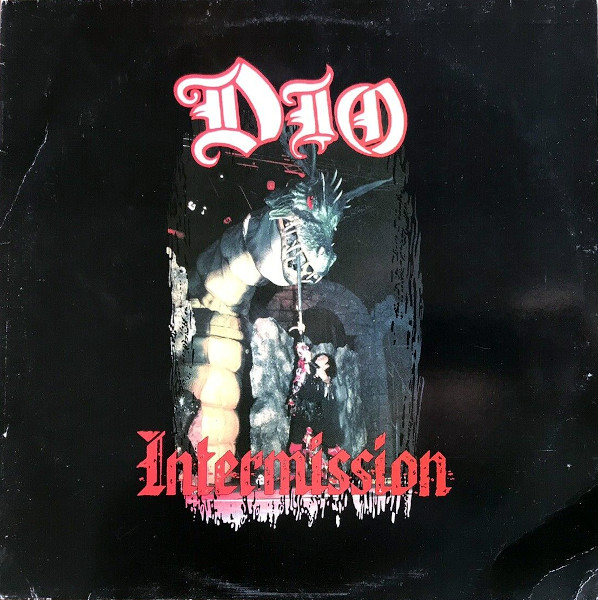 Thirty minutes of live music from the Sacred Heart tour plus a new track, “Time to Burn.”

I’ve always been on the fence as to whether Intermission is a skimpy elpee or an overpriced EP. I guess that question was answered when Universal opted to tack these tracks onto the deluxe expanded edition of Sacred Heart rather than release an expanded, standalone version of Intermission. So, there you have it: thirty minutes of live music from the Sacred Heart tour plus a new studio track featuring Vivian Campbell’s mid-tour replacement, Craig Goldy. (Goldy also overdubbed some of the guitar on the live tracks.)

As the last of the Vivian Campbell albums, Intermission is more lame duck than fitting swan song. It’s too short, too muddy and Ronnie James Dio tries too hard to make a connection with the audience. At various times, Dio reminds the audience that they, the audience, are the real kings of rock and roll, and the rainbow in the dark, and the man on the silver mountain. By the time he gets around to conjugating the verb “to rock” (I rock, you rock, we rock) on We Rock, it’s a bit much. I could associate with “Iron Man;” I didn’t need to be Iron Man.

If I’m disappointed with Intermission, and I am, it’s because I’ve seen Dio live and they’re amazing on stage. The first lineup of Dio deserved a better testament: a double-album live set with top-notch production and no overdubs. At least what did make the cut was prime Dio: King of Rock and Roll and Rainbow in the Dark were made for the stage, and the decision to add a couple of songs from Dio’s days in Rainbow is a nice surprise. The new song, Time to Burn, isn’t bad either and bodes well for the future.

You seriously don’t need to buy this album. In fact, if you buy the 2CD version of Sacred Heart, you’re already getting it for free. Intermission is more of a fan supplement or snack than a proper live album. I was down with Murray the demon, but Denzel/Denzil/Dean the dragon not so much. I guess we all have our demons, but only a few of us have our dragons.