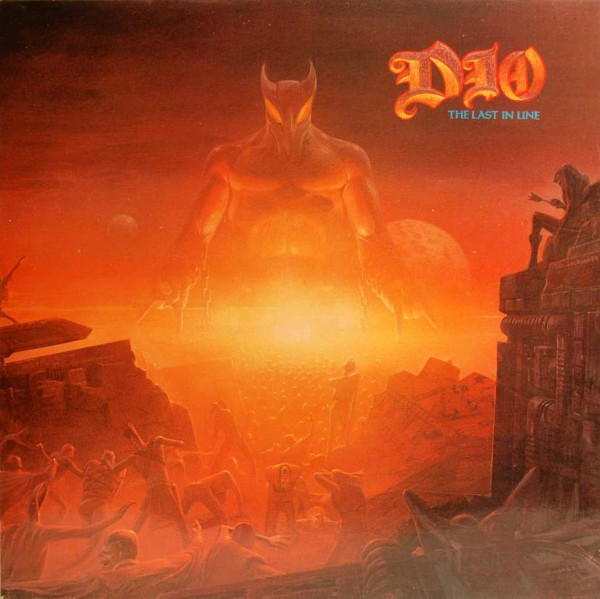 Every bit as good as their first album and, also, the last classic Dio album, but oh how brightly they burned.

The fashionable thing to do in metal circles, I gather, is to debate whether Holy Diver or The Last in Line is the better Dio album. Because, apparently, I’m not the only person on the planet interested in arguing the pros and cons of nothing. In my humble yet overly exposed opinion, Dio’s second album is a copy by design, and copies are rarely valued as highly as the original. Had they been reversed in order, The Last in Line would be universally hailed as the better album. I don’t know where I find the time to think about these things, but feel free to do something better with your own time.

The Last in Line is also notable for the addition of keyboardist Claude Schnell to the group. I’m only kidding. I don’t think most people even realized there was a keyboard player on the album until they read the liner notes. You’ll be too dazzled by Vivian Campbell’s seemingly endless array of amazing guitar solos, the pummeling rhythms of Vinny Appice and Jimmy Bain and the inextinguishable energy of Ronnie James Dio to notice Schnell most of the time. Probably no accident there, since a keyboard player in a heavy metal band isn’t exactly kosher.

Just like last time, this album is bookended by a readymade concert opener, We Rock, and an epic closer, Egypt (The Chains Are On). Dio apparently drew from the same source of inspiration (Egypt) when explaining the cover concept to illustrator Barry Jackson, which again prominently features the demon known as, I kid you not, Murray. And, just like Holy Diver, Dio seems to have no trouble serving up one melodic metal masterpiece after another. The Last in Line is a favorite of mine because it starts out mellow and, just when the think the band is going soft, drops a massive slab of metal on you and leaves it there for the next thirty minutes.

From beginning to end, The Last In Line is high-octane metal. Sometimes, it’s surprisingly melodic (Mystery), and sometimes it’s surprisingly heavy (I Speed at Night). It’s the duality of Dio, that balance of dark and light, hope and despair, melody and metal, that makes them unique in the pantheon of metal gods. That said, the album does shift slightly to the dark side, particularly on the demonic ending to One Night in the City.

With Black Sabbath, Rainbow and Deep Purple on the decline, Ozzy Osbourne, Judas Priest and Dio were now the most colorful characters in heavy metal. That would change in a few years, but not before these battle-hardened masters of metal cleared a path for the new generation of metal bands to follow. Today, both Holy Diver and The Last in Line are rightly regarded as shining stars in the twilight of metal’s original golden age.

Bonus disc two reissue track listing
B1. Eat Your Heart Out (live)
B2. Don’t Talk to Strangers (live)
B3. Holy Diver (live)
B4. Rainbow in the Dark (live)
Live at the Pinkpop Festival 1984
B5. One Night in the City
B6. We Rock
B7. Holy Diver
B8. Stargazer
B9. Heaven and Hell
B10. Rainbow in the Dark
B11. Man on the Silver Mountain
B12. Don’t Talk to Strangers