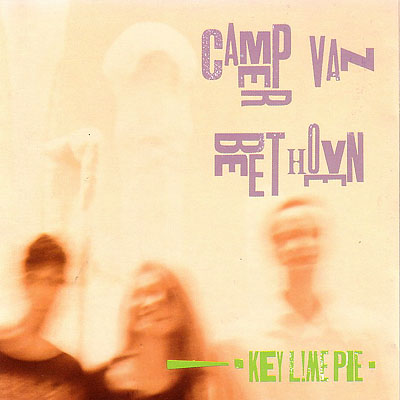 On the eve of the grunge revolution, the Campers pack it up with one last hurrah, followed by the ‘Mats and the Pixies.

Kronomyth 5.0: Songs in the key of lime.

This is the album that made a Camper out of me. “Sweethearts,” “(I Was Born In A) Laundromat,” “June,” “Flowers,” “The Humid Press of Days,” “Pictures of Matchstick Men,” great stuff all of it. David Lowery’s clogged vocals suit the kitchen sink arrangements: violins, organ, ringing guitars, prickly percussion and lead guitars that lean over everything like a bent, black rainbow. You’d have to look to Pixies to find a another band that could render oddball observations with such musical joy. Jack Ruby in portraiture, Ronald Reagan in dementia, a leftist lottery winner in America, the band’s eye doesn’t rest for a minute.

Like the Pixies, the band gives every song their all. Sure, the riffs behind “(I Was Born In A) Laundromat” and “Pictures of Matchstick Men” have Winner written all over them, but these are fourteen favored children with no filler among them. (“Interlude” is a tiny connector, but it sets up “Flowers” so perfectly I can’t imagine Key Lime Pie without it.) New violinist Morgan Fichter fits in just fine too, in case you were wondering where Jonathan Segel flew off to. Though I tend to pick up Pie at “June” and devour the second half in one sitting, you can eat the whole Pie at once (crust and everything). “Borderline” and “Come on Darkness” don’t resonate with my daily mood so much, but they go down easy enough.

Unfortunately, I can’t tell you where Key Lime Pie belongs next to their other works, since I don’t own them yet.* (Chance, my enemy, conspires to keep Camper at a distance.) However, comparing it to Pixies isn’t going to kill anyone, so let’s say it’s like Bossanova. (Okay, everyone: It’s like Bossanova.) Playful, pointed, inspired and unpredictable, Key Lime Pie is a keeper, even if it’s the only Camper company I currently keep.

*I’ve since heard all the original Camper albums and would tell you that they got tastier over time.