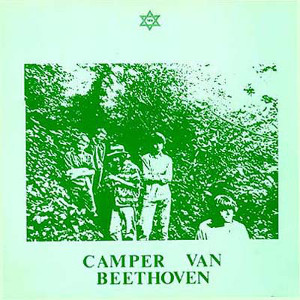 The band’s second album features more smartalecky, lo-fi indie rock made by everyone’s favorite former latchkey kids from California. II & III reduces the quasi-Ukrainian folk music quotient down to one (“4 Year Plan”), which is a kindness, replacing it with swamp music (“Abundance”), psychedelic sketches (“Circles”), cowpunk instrumentals and a handful of winning songs, none of them better than the sentimental “Sad Lovers Waltz.” Yet Camper Van Beethoven is still a tease. “(We’re A) Bad Trip,” “Cowboys From Hollywood” (a fitting candidate for the band’s unofficial theme song) and “No More Bullshit” show the band’s strength is two-minute, twisted songs with David Lowery’s bored, nasally voice at the fore, but they’re pretty damn stingy with it. It’s almost as though, for every song they finish with words, the band needs to blow off steam with two minutes of instrumental muckery (un petit portmanteau, in case you’re wondering). The first album had better songs but was self-consciously absurd. The second album is less odd for odd’s sake and more likely to wear its affections on its sleeves, from VU (“Sometimes”) to Sonic Youth (“I Love Her All The Time”) to I’m pretty sure it’s the Buzzcocks (“Chain of Circumstance,” sung by Jonathan Segel). In the jetpackin’ 21st century, the original album was released with a handful of bonus tracks, including the awesome “Down And Out,” which namechecks Lou Reed. We’re not out of the woods yet; II & III doesn’t show a quantum leap in maturity or anything like that, but there are signs that the band is taking themselves (and their music) more seriously.

Original LP Version
A1. Abundance
A2. Cowboys From Hollywood
A3. Sad Lovers Waltz
A4. Turtlehead
A5. I Love Her All The Time (Sonic Youth)
A6. No Flies On Us
A7. Down And Out
A8. No Krugerrands For David
A9. (Baby Don’t You Go To) Goleta
A10. Four Year Plan
B1. (We’re A) Bad Trip
B2. Dustpan
B3. Sometimes
B4. Chain of Circumstance
B5. ZZ-Top Goes To Egypt
B6. Cattle (Reversed)
B7. Form Another Stone
B8. No More Bullshit

I honestly have no idea who wrote what. Not really gnawing at me either, but I’ll fix it eventually.

The Plastic
Released on elpee in 1986 in the US (Pitch A Tent, PITCH A TENT 01) with lyrics sheet.