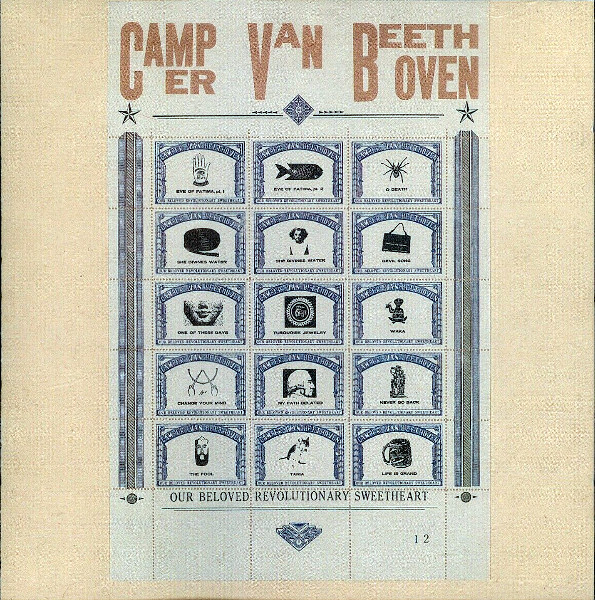 CvB’s major-label debut. You can take the cowboys out of Wyoming, but you can’t take the Wyoming out of the cowboys.

Steeped in my suburban ways, I couldn’t pretend to tell you what Eye of Fatima really means. The mind on drugs makes interesting connections, and suddenly Egyptology and conspiracy theories get swirled together into a rock & roll road song that clangs noisily into the gears of our mediocracy like a perfectly placed wrench. Even MTV played an unwitting part in the conspiracy, featuring a music video for Fatima in which the members of Camper Van Beethoven, choreographed in what can only be described as a collective lurching, threaten to tumble off screen as the very musical firmament cracks and splits beneath them.

The Campers signing to a major label should have heralded a flying-pig apocalypse. Instead, “Eye of Fatima” gave us a mere glimpse into the end of days. The rest of the record is a refinement of their last, with producer Dennis Herring presumably helping the band reign in their eclectic tastes and shaping their strangeness into solid song structures. The references to classic rock are largely absent this time, but their sweetness and charm continue to rise to the surface in wonderful songs such as She Divines Water and Life is Grand.

From a musical standpoint, two things always jump out at me when I listen to Our Beloved Revolutionary Sweetheart: that Jonathan Segel’s violin has largely supplanted the traditional role of the lead guitar (mabye it always did) and that it has a lot more horns and harmonicas than any other CVB album. Despite the challenges of working with an international record label that people had actually heard of, OBRS stays true to the band’s guiding principles. You’ll still find Ukrainian swamp country stomps (Eye of Fatima, Part 2), sympathetic socialist stories (Tania) and goofy country songs (Never Go Back, which first appeared on 1987’s Vampire Can Mating Oven EP).

If I stop short of calling OBRS their best album, it’s because the last three records are largely of a piece. My Path Belated and “Wishing to Course” spring from the same source of inspiration, One of These Days and “Borderline” too. The album production progressively smoothed out the rough edges with each album (insert image here of angry alt-rockers shaking their tiny fists at promotional posters of Key Lime Pie and All Shook Down), which to my mind uncovered more of the melodic genius that had always been sulking under the surface of their songs. As “Eye of Fatima” and “Life Is Grand” reveal, Camper Van Beethoven intends to have their cake and eat it too on Our Beloved Revolutionary Sweetheart. As for Virgin, well, they’d get their just desserts in time.

All songs written by Camper Van Beethoven unless noted.