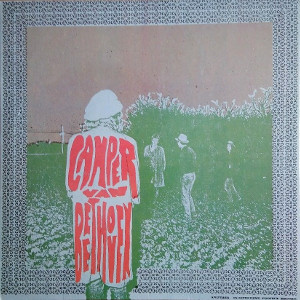 “I didn’t really know anything about Eastern European, klezmer, Balkan music, or any of that stuff. The idea of Camper Van Beethoven was like what the surf bands did, like ‘Oh, well this is our idea of what Ali Baba sounds like,’ where they played it on surf guitars. So this was like, ‘Well this is our idea of what Eastern European music sounds like, we’re gonna play, like, fake Eastern European music.’ The whole point was getting it wrong and creating something new.” — David Lowery, in a 2013 interview.

Kronomyth 1.0: THE GRAND DADA OF THEM ALL. The Camper’s debut album featured a sticker on the outside packaging that wondered aloud what an absurdist/surrealist folk cum California punk band would sound like if they set out to write songs about TV dogs traveling to the moon, communist leaders lost in idle reverie and fictitious folkscapes from faraway places. The answer is a polka band tripping balls, about seventy-five percent of the time anyway. Which is not as much fun as you’d think. Sure, there are some great laughs on here—“The Day That Lassie Went to the Moon,” “Take The Skinheads Bowling,” “Club Med Sucks”—but you’ll need to wade through a lot of Ukrainian folk/punk/whatever in the meantime. The instrumentals (a/k/a the bulk of the album) are either ethnic ska or noisy folk/art or sometimes both (the winning “Balalaika Gap” for example). At their best (e.g., “Border Ska”), the instrumentals are short, guilty pleasures. At their worst, you’re reminded of why no one else was making music like this. The talent is definitely there, especially on the vocal tracks, which include an embellished cover of Black Flag’s “Wasted” and the perfectly titled “Ambiguity Song.” Wisely, the band inverted the vocal/instrumental ratio on subsequent albums, and the world warmed up to them. Here, however, it all feels like a soundtrack to an Eastern European art film, especially if you pick up the expanded edition that folds in the contents of the mostly instrumental Take The Skinheads Bowling EP. The deadpan vocal delivery, screeching violins and psychedelic garage sound are unmistakable as the Campers, but they initially set up camp pretty far out on the fringes, and it’s a bit of a hike just to hear a few good punk/pop songs.