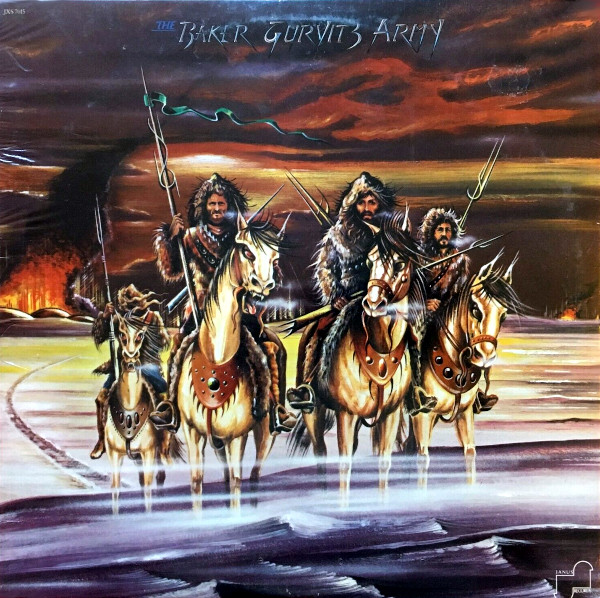 Baker the Mad Beserker and a pair of hired Guns (the Brothers Gurvitz) storm through seven songs of hard/progressive rock and one unfortunate ballad, for which the world is mostly a better place, if only for forty minutes. Not so much different from what the original Three Man Army set out to do, I suppose, except that Ginger Baker’s neverending battle against boredom produces its share of strange odysseys, both in drum solo (Memory Lane) and story form (Mad Jack).

If pressed for a list of the 70s better guitarists, few of us would find “Adrian Gurvitz” ready on the lips, largely, it appears, because of underexposure in bands like this. He is, in fact, a smart and succinct rock guitarist, a more-than-serviceable vocalist and a songwriter of no small merit. Help Me, Inside of Me and Since Beginning (itself a worthy citizen of Yes’ Topographic Oceans) are as good as anything that the mid-Seventies progressive movement produced (with the caveat that many progressive bands were moving toward melodic, short-form rock at that point in time).

The bulk of Baker’s creations were better than they were given credit for, and while time has forgotten The Baker Gurvitz Army, you don’t need to slavishly follow time and its preening ways as it courts the fickle present. Instead, go behind time’s back and dig this one out of the past; it’s worth the effort, particularly if you’ve ever found yourself raising the fallen standard of Uriah Heep or Rainbow in conversation. Of interest: 4 Phil is dedicated to Phil Seamen, Baker’s mentor, who passed away in 1972.

Cover painting by Joe Petagno, who also designed the album covers for The Graeme Edge Band and countless Motörhead covers.