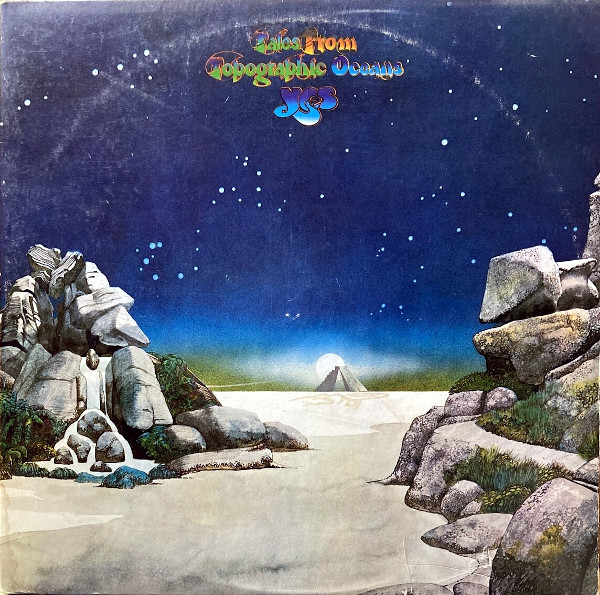 The group’s most ambitious work yet, although it does occasionally topple over under its own excesses.

Tales from Topographic Oceans is based on four types of shastric literature, as Jon Anderson and Steve Howe explain in the album’s liner notes. I couldn’t really follow the whole concept, but that’s a small matter; the bigger problem is that the rest of Yes didn’t seem to follow it either. The result is a jumbled mess of brilliant ideas that fails to mesh the way that their last few albums did. There is unquestionably great music afoot on Tales from Topographic Oceans, but I can’t help feeling that, if the individual parts had been liberated from their side-long suites, Tales would have been hailed as the band’s white album. Instead, it’s more of a white whale.

That said, there is not to my knowledge a surplus of beauty in the world, and there are many beautiful moments hiding in these Tales. Yes detractors, whose disdain for Close to the Edge or Fragile could be dismissed as musical ignorance, were harder to ignore this time around because, honestly, they had a point, especially when The Ancient rolls around. But fans of this album are to be envied, not rebuked, for seeing the glass as three-quarters full rather than one-quarter empty.

Anderson and Howe do the lion’s share of the lifting on this album, and it’s here that you begin to see the band breaking into two camps. Rick Wakeman, who curried the favor of no one with his on-stage antics, already had one foot out the door. Chris Squire and Alan White rarely mesh like the rhythm section of old, Ritual notwithstanding. Even Eddie Offord seems to have trouble following along, as the mix sounds surprisingly muddy much of the time. (Or maybe it was the greenhouse gases from the cardboard cows.)

That’s pretty much the end of my griping. Now for the good stuff. The Revealing Science of God features what may be my favorite melody in all Yes canon, The Remembering has many isolated moments of beauty and “Ritual (Nous Sommes du Soleil)” is half a fantastic Yes album all by itself. At their best, Yes is celestial. Like Close to the Edge, passages here are God-breathed; it will (hopefully) be years before I encounter music so heavenly again.

The earlier Yes albums were works of unearthly beauty and inhuman precision. Tales from Topographic Oceans is a work of unearthly beauty. You can lament the loss of the tightly meshed gears that drove “Long Distance Runaround” and “Close to the Edge,” or celebrate Tales’ fearless pursuit of music’s sublime heights, but only one path leads to true happiness.