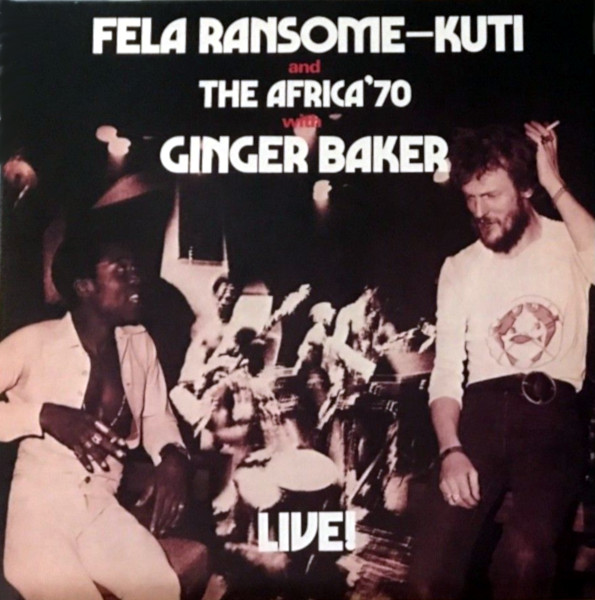 Baker’s interesting African exile led him into Fela’s camp for a few albums, with this being perhaps the most famous.

Kronomyth 2.0: The men who would be kings.

I have optimistically thirty years of lucidity left and, should I write a review a day while factoring for holidays and the creative aridity common to all genius (tic), might with the favorable winds of fortune arrive at the round number of 10,000. Among that horde will inevitably be the unworthy, unloved and ill conceived, but the true artist takes inspiration where he (or she) finds it, and I lie helplessly supine to the persistent overtures of art.

I write “persistent” because it is a type of nervous gnawing that goads me into writing about music. Take this live album from Fela Ransome Kuti featuring Ginger Baker for example. For years, its very existence has been a small stone in my comfortable walk with the Cream drummer. Why would Baker lend his rock gravitas to this outlaw king of afrobeat who few had heard of in the west? One might take from it that Baker had resigned himself to the role of an ambassador-for-hire, but Baker, history tells us, has never sold out to anything but his own convictions (and the inevitable demons that arrive on the coattails of conviction). The subsequent Stratavarious suggests it was instead part of an exchange program between the two stars (and the absence of titular reciprocity speaks volumes to Kuti’s presence in the west).

The mercurial Baker might well have been the white elephant in the room, but he had come to Africa as an observer, not a conqueror. The image I have in my head of the two men is from the film, The Man Who Would King. Kuti, with his political delusions of grandeur, and Baker in self-imposed exile, tried and ultimately failed to create their own islands, finding that even the best fences ultimately fail to guard us against reality. But at this moment, in this place, they are kings.

That said, Live! is Kuti’s show. Baker is simply the honored guest, the famous observer. It is Kuti and the Afrika ’70 band who create the music with their deep polyrhythms and sensual afrobeat sounds. Baker’s presence is most keenly felt during a distinctly western drum solo on “Ye Ye De Smell.” [A subsequent CD remaster adds 16 minutes of titans (Baker and Tony Allen) at play with thunder that dates from 1978.] The focal point remains Kuti with his virile vocals (a mix of African and English) and organ solos.

The music is a mass of elastic energy that expands and contracts around an axis of rhythm and melody. I can tell you that, after listening to this, I was quick to acquire more of Kuti’s music (ah, cross-marketing, you curvaceous siren). I had, after all, missed the afrobeat movement in the 70s, and only experienced it through the filter of western artists (e.g., Talking Heads) and labels (Osibisa, Edikanfo).

Now, you may pity me my paucity of knowledge for an entire continent of music, or marvel at my audacity to expose said paucity. This album was likely an entrée for many into the dark and lurid landscapes of afrobeat, noting that contemporary western jazz and funk would soon assimilate elements of it into their own dialogues. The effect of hearing this with western ears, I imagine, is not unlike the African response to hearing the music of James Brown. Both Brown and Kuti are magnetic, larger-than-life presences whose songs have clear overtones of sexuality and social activism. It is, after all, a man’s man’s man’s world, which is well and fine if you’re the Man, but not so fine if you’re intent on fighting him.

All songs written by Fela Ransome-Kuti.