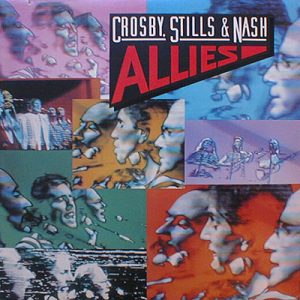 Eh, usually I’d write something cynical here about allies for the almighty dollar (alles unter die gelp), but this contains too many good performances for me to grouse. The opening pair of tracks are new songs recorded live in Los Angeles, heavy on Stills and light on Crosby, with Nash mashed somewhere in the middle. From there it’s a straight live album (the first two songs could pass for studio tracks), the bulk of it coming from a 1982 show in Universal City, California. Honestly, there’s hardly any rust in songs like “Wasted On The Way,” “Dark Star” and “Blackbird.” Even Nash’s “Barrel of Pain,” which was easy to overlook on the mediocre Earth & Sky, sounds better in this setting, suggesting a sort of Pink Floyd undercurrent that I didn’t hear the first time. And it gets better: two tunes from a 1977 show in Houston, “Shadow Captain” and Crosby’s rendition of “He Played Real Good For Free.” (Because you would have to travel back in time to find a good Crosby performance.) The backing band is predictably solid, including Michael Finnigan (who steals the spotlight from Nash on “Barrel of Pain”), George “Chocolate” Perry and Joe Vitale. The way they funk up a song like “For What It’s Worth” is a treat, and together with strong harmonies from (purportedly) Crosby, Stills & Nash, this feels like prime time CS&N rather than a band past its prime. Allies didn’t chart particularly well, didn’t sell a lot of copies and it was another five years until they’d get around to working together again. Still, this album is enough to rekindle the hope pregnant in the magic glyph of CSN, a reminder that wasted time doesn’t equate to tarnished memories.