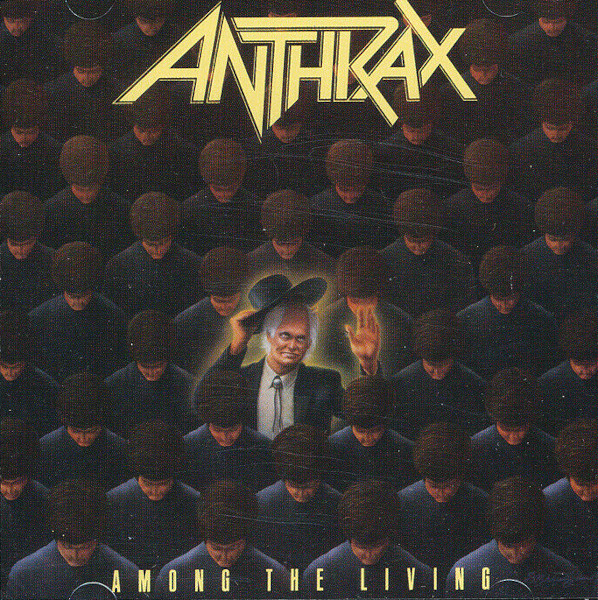 This is what being run over by a tank must feel like. It started with Spreading the Disease, but that was just a taste of what Captain Trips had in store for the world. Among the Living is a metal blitzkrieg: crushing guitars, pummeling beats and lead guitars that lacerate the mind. Forget thrash metal, this is thrash, bash and slash metal.

The opening title track starts out like one of those portentous Black Sabbath songs, winds itself up into a midspeed metal froth and, before long, is grinding your bones into dust with a metal fury that makes an EF-5 tornado look like a carousel ride. To paraphrase Pantera, Among the Living represents a whole new level of confidence and power. The next track, Caught in a Mosh, then does the unexpected, injecting rap sensibilities (i.e., talking/singing) into the thrash metal fray. Just when you think it can’t get any more intense, Dan Spitz adds a guitar solo that turns the intensity up to, I dunno, fourteen on an imaginary scale of one to ten. I Am The Law continues the comic-book-come-to-life metal fantasy with an aggro-metal attitude that is drokkin’ awesome. Efilnikufesin (N.F.L.) tackles drug abuse and rips it apart in its metal jaws. Tipper Gore and the PMRC no doubt thought it was promoting drug use. A Skeleton in the Closet fantasizes about torturing a confession out of an old Nazi, a common theme in comic books. As a wise man once said, “All crimes are paid.”

The second side doesn’t yield an inch. Indians is a crushing condemnation of America’s evil foundation. One World is a song about nuclear destruction that again feels as if it were torn from the pages of a hardcore, dystopian graphic novel. A.D.I./Horror of It All starts with an acoustic intro from Spitz, a la Tony Iommi; it’s the calm before the stormtroopers, as the band unleashes some of their heaviest music yet. Imitation of Life takes a parting shot at plastic record industry people, one of the last times that Anthrax could reasonably be considered as outsiders looking in.

Listening to Among the Living, you really get the sense that Anthrax was trying to push the envelope with a battering ram. Producer Eddie Kramer has alluded to the fact that the sessions were a bit difficult because the band was after a specific sound, and the newness of that sound was probably what confounded Kramer. (I write “probably” because, honestly, what do I know?) For my money, this is the best Anthrax album and a shoe-in for any list of classic metal albums. Rolling Stone ranked it #20, right in the middle of Metallica’s And Justice for All and Megadeth’s Rust in Peace. In a lot of ways, Among the Living raised the bar for metal bands and served as a kind of culmination for every adolescent fantasy.

All songs written and arranged by Anthrax unless noted.