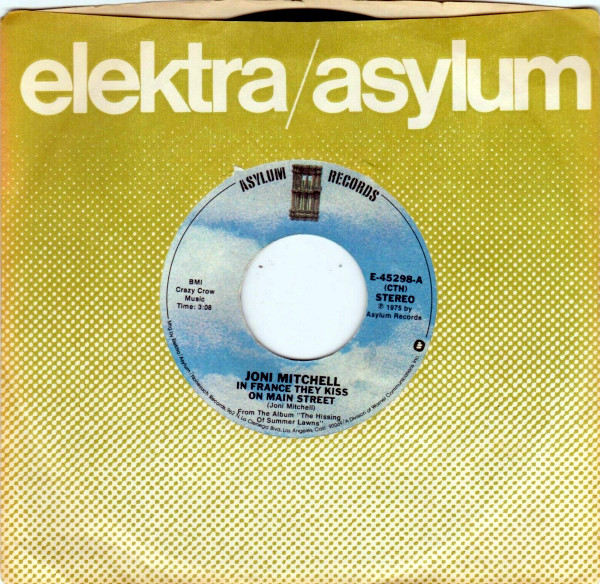 The hit from The Hissing of Summer Lawns was met mostly with crickets.

Radio stations gave The Hissing of Summer Lawns quite a bit of airplay, but the album’s single, In France They Kiss on Main Street, charted poorly. Blame disco if you want, or maybe it was just the collective dumbing down of America. “Coyote,” the single from her next album, didn’t even chart at all, and that was a brilliant song. “In France They Kiss on Main Street” is plenty smart too, but reminiscent of “Free Man in Paris,” so maybe audiences felt they’d already been on this trip.

The flip side is The Boho Dance, for my money the better song. While the A side seems like Joni acting, the B side feels autobiographical. In it, Joni is a rock star lamenting the lost Bohemian. You always knew that Joni Mitchell was too smart for the radio, but it took radio listeners a while to wise up to the fact. Now, she and Bob Dylan took a back seat to Bay City Rollers and Barry Manilow in a hedonistic world of hot pants and halter tops.

Of minor interest, the missing seconds on the single version of “In France They Kiss on Main Street” occur from an abrupt fade at the end; otherwise, both tracks are identical to the elpee versions. Dylan’s “Hurricane,” on the other hand, was pared down to a Part One. Philistines.