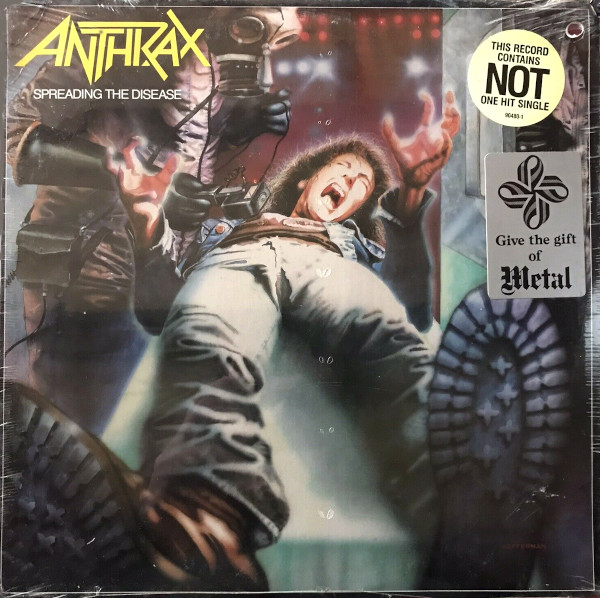 The album that vaunted Anthrax into the front ranks of the new metal revolution.

This is their Fly By Night, a reference that probably made you cringe, didn’t it? Eh, too bad. The past sins of their Priestly worship had been sweated out since Fistful of Metal. Spreading the Disease is the confident step forward into speed metal, their sound crystallized for the ages.

The big difference is the band’s taut, menacing stance and the presence of Joe Belladonna. Belladonna is a much better singer than Neil Turbin. A much, much, much better singer. The drumming from Charlie Benante is relentless, the guitar trio of Frank Bello, Scott Ian and Dan Spitz feels like a battering ram with a chainsaw strapped to the end of it and the lyrics trade in the dungeons & dragons imagery for dystopian nightmares and alienated heroes.

A.I.R. (which stands for “adolescence in red” according to Scott Ian) is a punch to the gut that even Armed and Dangerous didn’t prepare you for. It perfectly positions the band as heroes in a new wasteland of authoritarian control and systemic evil. Lone Justice continues to battle the world’s injustice with its five-fisted attack, this time borrowing the image of Clint Eastwood’s The Man With No Name. Madhouse is more tightly controlled chaos poured like molten metal into your ears, this time using the popular heavy metal motif of a sane hero branded insane by an insane world. S.S.C./Stand or Fall shows off a rare melodic side of the band, proving that they could do a lot more than just pound you with pummeling riffs for forty minutes. I would tell you it’s my favorite song on the album, but I’m also a melody-loving weenie who thinks 10cc’s “The Things We Do For Love” is the greatest song ever written. The first side closes with The Enemy, a unifying song about Hitler’s new world order, because we can all agree that Hitler sucked it hard.

The second side kicks off with Aftershock, and this is probably as appropriate a place as any to talk about how cool the band’s backing vocals are (they sound like a cross between a football cheer and threatening someone). It’s a device the band seems to have borrowed from punk rock, remembering that Anthrax covered The Sex Pistols’ “God Save the Queen” on their previous EP. Speaking of which, Armed and Dangerous is a darker vision of the original, with a less acoustic-y intro, since Tony Iommi is the only heavy metal guitarist who could really get away with that. Medusa, with lyrics by Jon Zazula, returns to the D&D imagery for one song. The album closes with a glimpse into the band’s sense of humor, Gung-Ho. Oh, and it also totally kicks ass. Not too many bands could shift from sonic assault to silly without sounding, well, silly.

Spreading the Disease is the beginning of the awesomeness. Honestly, you weren’t going to build a mythology out of Fistful of Metal any more than Rush! or Yes! or Trespass! (Okay, so Trespass didn’t actually have an exclamation point, but I didn’t want it to feel left out.) But the band that gave you “A.I.R.” and “Madhouse” and wacky illustrations and Dan Spitz? You’d follow them anywhere. Many did, and found their promised land in the follow-up, Among the Living.

All songs written and arranged by Anthrax unless noted.