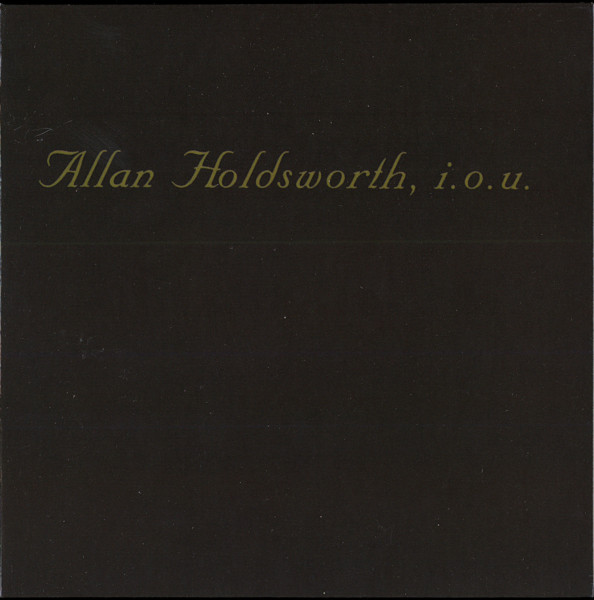 Everything you thought you knew about the electric guitar is about to be challenged by Allan.

Over the years, Allan Holdsworth’s I.O.U. has accumulated a lot of interest. I had thought Velvet Darkness was impressive but, no, it’s a half-baked mess compared to the hyper-articulate I.O.U. Mixing songs and instrumentals, this will remind you of King Crimson (post-Discipline), Bill Bruford, U.K., Frank Zappa and Steve Hackett, even as it challenges much of what you thought you knew about the electric guitar. The sounds that Holdsworth gets out of his Stratocaster are not to be believed. There are soft, silken stretches of sound that emulate electronic keyboards and long legatos of incredible skill and grace, all of it delivered with a mathematical precision that transcends ready comprehension.

“No one—absolutely no one—was interested in anything that I did. We couldn’t get any gigs, which is why we called the band I.O.U. The few gigs that we did do there always ended up costing us more money than we’d get.” – Allan Holdsworth, in a 1982 interview with Guitar Player.

While none of Holdsworth’s albums could be called commercial in the usual sense, I.O.U. is more accessible than most, with actual vocals (Paul Williams, who would fit somewhere between Jack Bruce and Jeff Berlin) and a crackerjack rhythm section of Paul Carmichael (bass) and Gary Husband (drums). Holdsworth spotted Carmichael and Husband playing at Ronnie Scott’s Jazz Club in London, and the young pair made the most of the opportunity with superlative playing that belies their tender years. (Husband wasn’t even 21 when this album was recorded—which is shocking to think about, except that you’ll probably be too shocked by Holdsworth’s guitar most of the time to notice.) Fripp, Zappa, Hackett… they all make fine guitar heroes. But you really owe it to yourself to listen to this album, at which point you’ll quickly add Allan’s name to the list of great guitar gods.

A1. The Things You See (When You Haven’t Got Your Gun)
A2. Where Is One
A3. Checking Out
A4. Letters of Marque
B1. Out From Under (Steve Robinson/Allan Holdsworth)
B2. Temporary Fault
B3. Shallow Sea
B4. White Line (Allan Holdsworth/Gerry Brown)

All songs written by Allan Holdsworth unless noted.