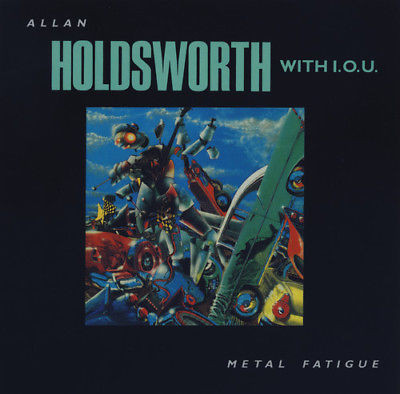 This is probably what U.K. would have sounded like if Holdsworth were in charge of the band rather than a hired hand.

Following his short-lived and doomed dalliance with the majors, Allan Holdsworth returned to the realm of independent records and released the highly listenable Metal Fatigue. The album credited I.O.U. (which now consisted of Chad Wackerman, Jimmy Johnson and Paul Williams) as the backing band, and featured a mix of instrumental and vocal songs that invited comparison to Holdsworth’s earlier stint in the supergroup format, U.K.

Holdsworth’s guitars, however, take center stage from the beginning. He manages to get at least a dozen distinct sounds out of his guitar, ranging from soft and jazzy keyboard tones to squonky prog guitar solos. Flim & The BB’s Jimmy Johnson is an excellent choice on bass, and ex-Zappa alum Chad Wackerman provides typically challenging rhythms, but you won’t be able to take your ears off of Holdsworth for more than a few seconds as you alternate between asking yourself “Is that actually a guitar?” and “Can a human being really play the guitar that fast?”

Although he never played with Frank Zappa, it’s amazing to me how much Holdsworth sounds like Adrian Belew, Mike Keneally and Steve Vai (although I’m guessing it’s really the other way around). The opening “Metal Fatigue,” for example, sounds a lot like something Mike Keneally would have concocted, with its rock-music-turned-on-its-head approach. And about a minute into “Devil Take The Hindmost,” there’s that familiar Adrian Belew animal wail making an appearance. The second side of music is dominated by the fourteen-minute “The Un-Merry-Go-Round,” which offers slightly classical variations on a theme and provides the album’s most challenging listening.

Although never destined for wide commercial acceptance, Metal Fatigue will appeal to those prog rock aficionados who would gladly burn a candle to the greatest living guitarist at any particular moment, which would be Allan Holdsworth for a good twenty minutes of these moments. As the last of AH’s albums before he fell under the spell of the SynthAxe, Metal Fatigue is one of the more amazing guitar-centered prog records you’re likely to encounter. If you dug U.K., you owe it to yourself to check this one out.