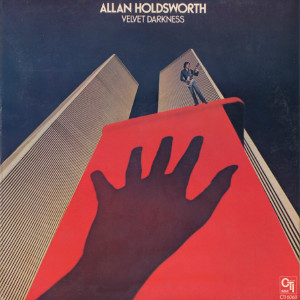 CTI’s “stolen” recording session of Allan Holdsworth in a fusion quartet to be filed under Mahavishwegotpaid.

Kronomyth 1.0: The soundcheck is in the mail.

Velvet Darkness is a musical bastard. Holdsworth himself has disowned it as the illegitimate offspring of a recording session that was never paid for or approved. This has not stopped record labels from re-releasing it over the years or fans from praising it. Featuring a mix of fiery fusion instrumentals and acoustic guitar interludes, Velvet Darkness is occasionally breathtaking. The performances are excellent; I gained a newfound respect for Narada Michael Walden and Alan Pasqua after hearing this album (I was already impressed with Alphonso Johnson).

“It was no good. It was never any good. The way it was recorded, what happened to the musicians, the whole thing. It was a complete disaster.” – Allan Holdsworth on Velvet Darkness, as quoted in a 1993 Innerviews interview.

I agree with Holdsworth that the performances are far from perfect. “Wish,” for example, just ends. Three acoustic numbers is a bit much, 30 minutes of music isn’t enough at all. But if you listen to “Velvet Darkness” and think “Hmph, it could have been better,” then I pity you your perpetual disappointment with everything. In addition to the unexpected acoustic performances, Holdsworth plays violin on “Karzie Key” before switching over to electric guitar and blowing you away all over again. I can understand Holdsworth’s frustration at not being able to polish these pieces and (more importantly) not getting paid for them, but if this is a “complete disaster” then call me a complete idiot. I see this as a window into the early workings of one of the era’s great guitarists. Later reissues shamelessly included alternate takes, so you may want to start there, but Holdsworth fans will definitely want to check this out in one form or another. You can send a $5 check to Allan’s estate if it makes you feel better.

All songs written by Allan Holdsworth.