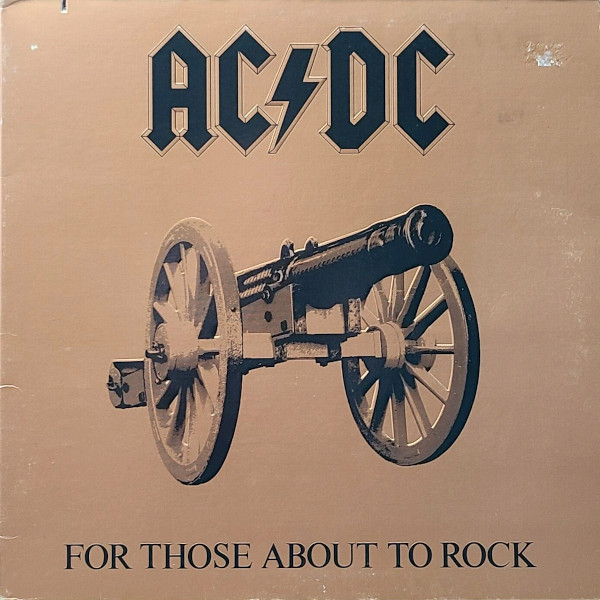 Back in brown. If this is a slight notch below the last two Mutt Lange-produced records, I’ll still stand up and salute it.

Kronomyth 9.0: We’ve got the biggest cannonballs of them all.

It was a long way to the top for AC/DC. Before they began their inevitable descent, they rested at the plateau of perfection for one more album. For Those About To Rock We Salute You completes the royal triumvirate of AC/DC records produced by Mutt Lange. Recorded in France, Rock is immaculately produced and engineered, which is both its crowning achievement and its Achilles heel.

Lange’s approach is different this time: the songs start with the spark of an idea and then quickly catch fire, building into a pyre of heavy metal majesty. The technique is best captured on songs like “For Those About To Rock” and “C.O.D.,” where the man called Mutt creates an almost Pavlovian anticipation of the power chords to come. Yet there is the sense that the thunder and lightning, which arrived so naturally in the past, is staged this time.

If Lange seemed intent on cleaning up the band’s sound, Angus and the band certainly didn’t bother to clean up their act. Brian Johnson’s voice is absolutely brutal on this record, while the lyrics (like the infamous album cover) offer only the barest pretense of innuendo. “Let’s Get It Up,” “Inject the Venom,” “I Put the Finger on You,” no confusion what they’re talking about there.

Success tends to spoil a band. Sometimes the change is overnight, other times it’s more insidious. AC/DC’s saving grace over the years has been to stick to the same game plan, and the success of For Those About To Rock is built on that solid foundation. It’s more polished than you might remember, and little here will raise your lighter as high as “You Shook Me All Night Long,” but you cannon argue with the fact that AC/DC earned its army of followers with albums like this.