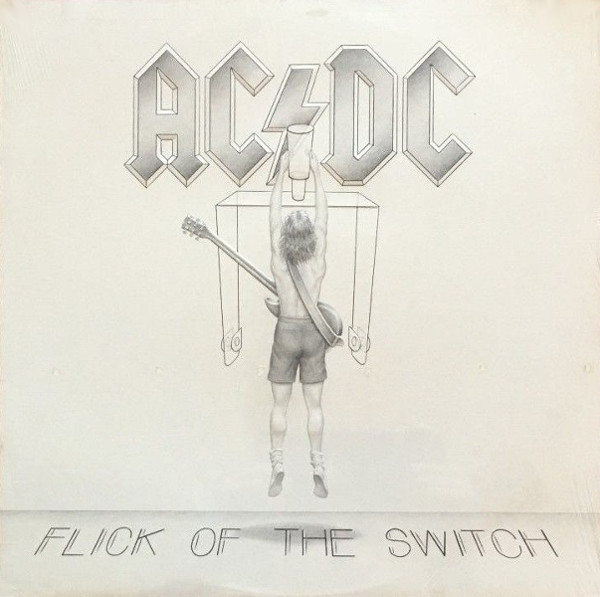 Hell and Black are universally beloved; most rock fans will raise a toast to Salute too. The self-produced Flick of the Switch, however, is another story. It charted well, went platinum too (eventually), but the magic was missing. Maybe it was the absence of producer Mutt Lange, who knew how to wring every drop of energy from the band’s formula, or the passage of time. There are no shortage of AC/DC fans who will champion this album; Powerage too, if you give them a chance. And I would agree with them that Flick of the Switch is a very good, maybe even great, album. I miss the ice-cold intros of their last few albums, but the reality is that after five or ten seconds it’s all the same: the band settles into a mighty groove, Angus delivers an amazing solo and Brian Johnson belches fire and belts out innuendo. In fact, as some have pointed out, Brian’s performance is one of Flick’s best features. What the album lacks is a standout single to rally around. “Nervous Shakedown” could have been that single, but the labels (or someone) chose “Guns For Hire” instead, which isn’t the first, second or third-best song on here. AC/DC, however, didn’t need no stinkin’ singles to succeed; if you don’t like this album, you weren’t an AC/DC fan to begin with. This is AC/DC with the sugar scrubbed off. Personally, I admire the band for tossing off the trappings of success and returning to their roots. “Rising Power,” “Deep In The Hole,” “Nervous Shakedown” and “Flick of the Switch” belong with their better songs over a long career. They’re not rock & roll anthems, and I don’t think the band had anthems on their mind when they made this album. What I hear on Flick of the Switch is a band reclaiming their legacy and making the sort of single-minded record that got them this far in the first place.

The Pictures
Cover design by AC/DC, drawn by Brent Richardson.