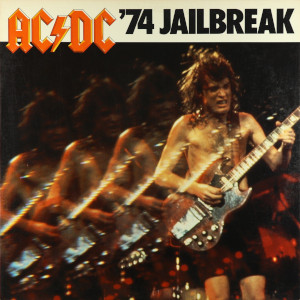 Atlantic collects a few leftovers for a snack-size AC/DC album. Some have made a meal out of it and come back for more.

Kronomyth 10.5: BAIL BON. Bon earned a second reprieve from his infernal estate, to amble among us in ghostly form once more, with the release of ’74 Jailbreak. Issued as a mini-album during the doldrums of the mid 80s, this is catch-all compilation that collects a handful of songs that slipped through the cracks when the labels assembled the original Australian and international releases of T.N.T. and High Voltage. “Jailbreak” is the obvious standout, a classic performance from Bon, Angus and the band that stands with their best work (and may have been remixed, although I can’t confirm it since I don’t own the original version). The rest of the songs are good, not great. “You Ain’t Got A Hold On Me” creeps along menacingly at a low boil and could have been built up into something special had the band chosen to revisit it. “Show Business” is a basic rhythm and blues song set on fire with Angus Young’s guitar while Bon bitches about the industry. “Soul Stripper” has star presence, beginning with a bass guitar that pounds like a racing heart. The production is different than most AC/DC songs you’ll hear—the guitars sound distant and there’s a lot of percussion in the mix—but the energy is unmistakably AC/DC. The last track is “Baby, Please Don’t Go,” a song that’s been recorded dozens of times over the years but rarely with the intensity shown here. Like Led Zeppelin before them, AC/DC could take a well-travelled blues song and imbue it with their own personality to make it uniquely their own. If you’re thinking the labels knew what they were doing when they left these tracks off the international releases, they didn’t. Every one of these five songs is an essential part of Bon’s legacy with the band. As with Black Market Clash, the labels left off some of the juiciest parts, which you can now savor as a light supper on ’74 Jailbreak.