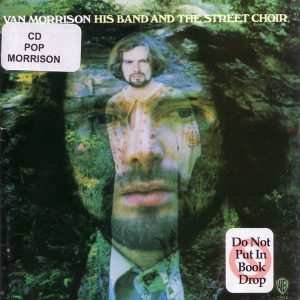 Kronomyth 4.0: HIS BAND AND WIFE. Sounding like New Morning-era Dylan in spots, His Band And The Street Choir is cryptic, tuneful, with R&B sensibilities at once keen and informal. Morrison, in further imitation of the Bard, has been evasive while dismissing the album as product and citing an original desire to make an a capella record without musical accompaniment. Now you might wonder, who goes into the studio with seven musicians to make an album without instruments?, so maybe Morrison was simply miffed that the album artwork suggested a spiritual album that wasn’t there. Or maybe he was self-conscious of the fact that many of the songs were holdovers from earlier sessions. Whatever the songs’ origins or Morrison’s original intent for the album, His Band And The Street Choir is a soulful, joyful record that features some great tracks: “Domino,” “If I Ever Needed Someone,” “Call Me Up In Dreamland,” “Gypsy Queen.” As always, Morrison had shaken things up a bit since Moondance; half the band had been sacked, more horns had been added, a choir (featuring wife Janet) included. The new band played with a deceptively loose style and Morrison recorded them with a certain looseness as well, even including snippets of studio dialogue to bring the recording experience one step closer. Listening to Dylan’s work from this era (Nashville Skyline, New Morning), you had the same sense that the veil had somehow been lifted. However, beneath the veil was the same inscrutability; were any of us ever intended to understand the meaning of “Went To See The Gypsy” or “Crazy Face?” There’s not even a consensus on the meaning of “Domino,” a song that millions have sung along to, convinced that it must mean something. There is no deeper meaning on His Band And The Street Choir than the deepness of the music, and there needn’t be.

All compositions by Van Morrison.