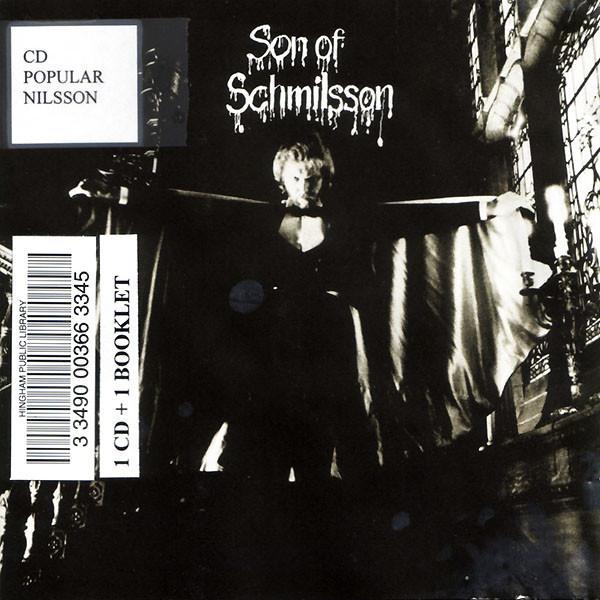 The Friday-night party before the lost weekend, although there are still a few winners on here.

Offhand genius mixed with off-the-leash eccentricity, there are some people who will tell you Son of Schmilsson is every bit the equal of Nilsson Schmilsson. Those people are filthy liars and not to be trusted.

The anticipated followup to Harry Nilsson’s breakthrough was a conceptual nightmare: a film crew circled the sessions hoping to make a movie of the making of the album, and producer Richard Perry had little hope of reigning in Nilsson’s idiosyncratic excesses in such an excessive atmosphere. The good news is that Nilsson’s genius and humor emerge intact. “Remember (Christmas),” “The Lottery Song,” “The Most Beautiful World in the World” and “You’re Breakin’ My Heart” are in line with his last album. The bad news is they brought a lot of baggage with them: the country send-up “Joy,” the sloppy “Take 54,” the morbid “I’d Rather Be Dead.”

Son of Schmilsson is a restless, fitfully brilliant record that smacks of self-destruction at almost every corner. The 2006 remaster includes a better take of “Take 54” that sounds like “The Ballad of John and Yoko,” the likeable throwaway “What’s Your Sign?,” a nice, quiet version of Jimmy Webb’s “Campo de Encino” and the single from Son of Dracula, “Daybreak.” The four extra tracks make a difference, as quantity compensates for a perceived lack of quality in the original eleven. (The Japanese 2007 remaster reconciled these with the two alternate versions of “Joy” appended to the 2000 remaster.)

As good as it is, it’s hard for me to hear Son of Schmilsson without thinking how much better it might have been if Nilsson hadn’t played the role of singer/songwriter/saboteur. Of not inconsequential interest to entomologists, Ringo Starr (Richie Snare) and George Harrison (Harrysong) consummate their affection for the artist with supporting roles on Son of Schmilsson, and in that sense this album served as a template for subsequent Richard Perry-produced albums by Ringo.