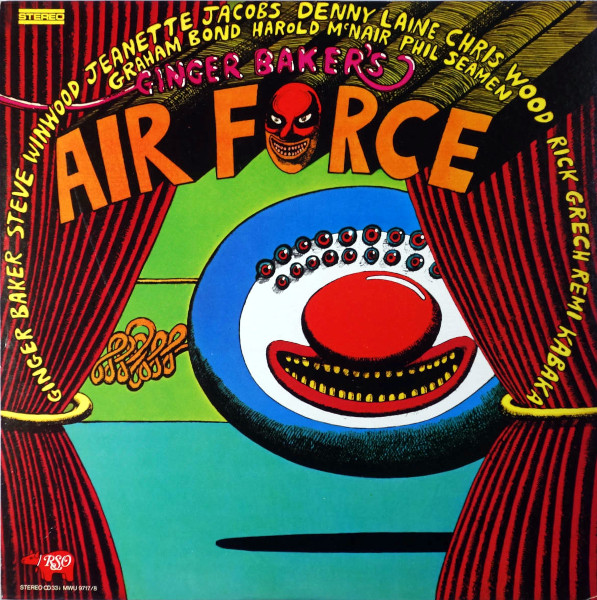 “During this set we’re going to do a few very, very strange numbers.” So begins one of the more interesting chapters in the storied career of Ginger Baker. At the end of 1969, with no future in sight for Blind Faith following Eric Clapton’s departure, Baker conscripted Steve Winwood and Rick Grech for his next project, a 10-piece jam band featuring Denny Laine, Graham Bond and Chris Wood. The group rehearsed new material plus some of Baker’s bits (“Toad,” “Do What You Like”) and mounted a brief tour, including a sold-out concert at the Royal Albert Hall. That show became the basis for Ginger Baker’s Air Force, a weighty and unwieldy double album with a vertically challenged cover and only eight songs, more than half of which clocked in at over 10 minutes.

Surprisingly (or perhaps not, given the state of Creamania), the record entered the US and UK Top 40 and even generated a single in Laine’s “Man of Constant Sorrow.” In many ways, Ginger Baker’s Air Force is the clearest expression of Baker’s clouded muse, mixing rock, jazz and African music in a combustible live setting that covers its sins with showmanship. Given how much Baker was able to achieve in a trio setting, a ten-piece band might seem like overkill. And, of course, it is. That’s the whole idea, really. Baker wanted to play the sh*t out of these songs, and he does. Listening to these versions of “Toad” and “Do What You Like,” Baker’s excessive epics make perfect sense. They were designed as full sonic immersion experiences to be heard long, loud and live. Creation is a messy process, and Ginger Baker’s Air Force is a mess, yes, but also mesmerizing. Far more fun than any of Traffic’s live albums, at any rate.