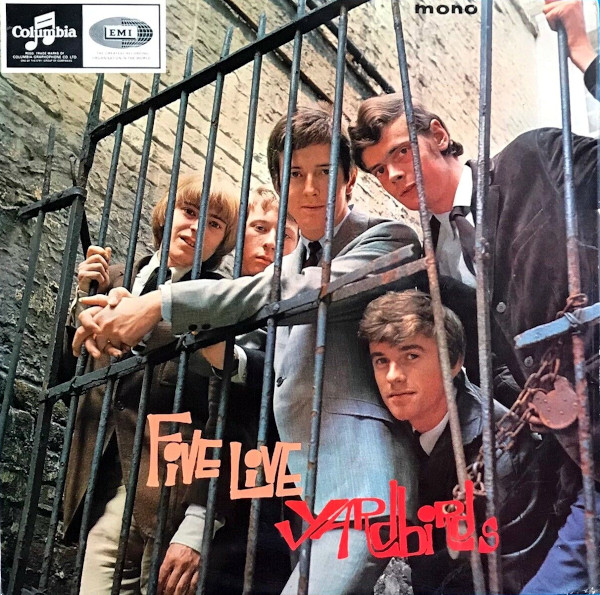 A muddy concert recording from The Marquee marks The Yardbirds’ official debut.

The fame of The Yardbirds spread when they took over for The Rolling Stones as the house band at Giorgio Gomelsky’s Crawdaddy Club. Eric Clapton’s guitar solos became the stuff of legend and the group’s energized performances of rhythm and blues standards were some of the most exciting rock & roll this side of The Beatles and the Stones. Their first record, Five Live Yardbirds, was a UK-only album featuring the band’s live set at the Marquee Club. Recorded in March 1964, it wasn’t released until the end of the year and failed to capture the record-buying public’s imagination.

While the album might have suffered a quiet death as an historical footnote, it has instead been resurrected over the years as one of the earliest and best examples of the English R&B movement. In my opinion, the recording quality isn’t good enough to justify the critical enthusiasm for this album. Keith Relf is a good singer and harp player, Paul Samwell-Smith a good bass player, but the main attraction must be the lead guitar of Clapton, which is often buried in the mix. I suppose, if you could travel back in time, you could nudge the sound engineer to boost Clapton’s mike, or push a young Benito Mussolini in front of a moving school bus, or whatever it is that time travelers do. Then you might have a great album — or a lot of explaining to do to the parents of Benito Mussolini, depending.

Also, I’m not a connoisseur of English 1960s R&B. Some of it improved upon the originals (e.g., the Stones and The Beatles), but mostly they were pale imitations. On this album, the Yardbirds do a nice job with The Isley Brother’s Respectable, Chuck Berry’s Too Much Monkey Business and rarely fail to generate a lot of energy between the two guitars, bass and drums. Keith Relf, however, isn’t as distinctive a vocalist as Mick Jagger, Ray Davies or Roger Daltrey (stiff competition, to be sure). Without those pipes, the songs on Five Live Yardbirds fizzle a bit, even as the performances produce plenty of electricity.

Had The Yardbirds captured their live lighting in the studio, their debut might have indeed been an instant classic. Instead, what survives here is a muddy live record of a very talented and influential outfit playing songs that, honestly, rarely outshine the originals and, over the years, probably wouldn’t represent the top five recorded versions of any of these songs.

* Yes, that should be Ellas McDaniel (a.k.a. Bo Diddley).