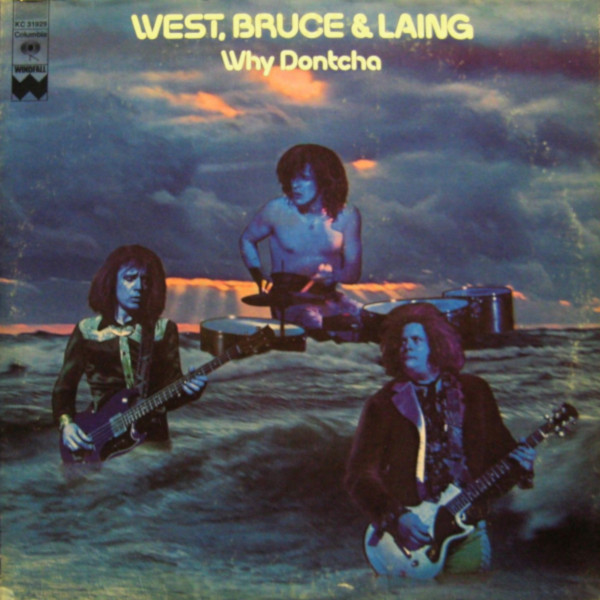 Calm down, Cream fans, this is just Jack Bruce replacing Felix Pappalardi in Mountain is all.

Kronomyth 1.0: The man who climbed up a trio and came down a Mountain.

Bassically, this is Mountain with layers of Cream in between. When Mountain crumbled, Jack Bruce replaced his former Cream associate Felix Pappalardi in the middle of Leslie West and Corky Laing. West, of course, was one of rock’s best guitarslingers and a solid blues vocalist to boot, but a strange sight to behold. The best that can be said of Laing is that he’s a better singer than Ginger Baker and a better drummer than Peter Criss. Add to that one eccentric English heroin addict, and you’d think that Why Dontcha would be ripe for disaster. Instead, the album continued Mountain’s winnings ways, entering the US Top 40 and generating enough interest for a followup and a live album.

Now, my interest in the trio really begins and ends with Bruce. West clearly has a boatload of talent, but the only song of his that connects with me on a deep level is “Love Is Worth The Blues.” The songs from Jack Bruce, on the other hand, are never less than interesting. I thought Harmony Row was brilliant if a bit strange, and the same genius is evident on “Out Into The Fields” and “Pollution Woman.” Bruce’s bass playing continues to be completely over the top–a holdover from the days of wine and Cream. He comes off the hinges at the end of “Third Degree,” and you don’t know whether to be amazed or appalled.

Honestly, without the Pappalardi connection, Bruce probably wouldn’t have set foot on this mountain. But he did, and gained a great guitarist in the bargain. Or, from another perspective, Mountain gained an erratic but entertaining star to pin on their power trio pedigree. Either way you look at it, West, Bruce & Laing is too interesting a combination to ignore. The end result is sort of CCR meets Cream without an obvious hit in sight, but with enough energy to make up for it.