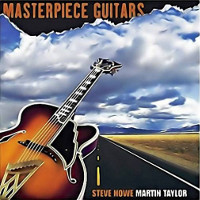 Steve Howe and Martin Taylor are a pair of outstanding instrumentalists, but it’s the instruments that take center stage on Masterpiece Guitars. This collaborative project actually includes a third party, collector Scott Chinery, who had amassed an impressive array of classic guitars in his (short) lifetime. Chinery had planned to publish an illustrated book of his guitar collection and, after seeing Howe’s own guitar book, engaged Howe and Taylor to preserve the collection in eternal audio as well through new recordings. The music featured on Masterpiece Guitars includes original compositions from Howe and Taylor as well as classics arranged for (mostly) jazz guitar: “Smile,” “Somewhere,” “All The Things You Are,” “Thank Heaven For Little Girls.” Steve Howe’s role is primarily as a producer/accompanist, with Taylor assuming the lion’s share of the playing. Thus, the disc is skewed toward the fluid jazz style that Taylor had established during his years alongside Stephane Grappelli, with Howe’s new age or country pieces in between. In other words, Steve Howe fans don’t necessarily need to add this disc to their own collection. And yet it is a wonderful-sounding disc, rich with the ringing intonations of guitar royalty. If you can name more than five vintage luthiers, chances are you’ll appreciate this effort. In fact, if you even know what a luthier is, you’re probably in the target demographic for this disc. From a Steve Howe perspective (since I’m not a huge jazz guitar fan), it’s interesting to see Masterpiece Guitars as the culmination of Howe’s own guitar cataloguery (ok, I made that word up), but only a few tracks (e.g., “Tailpiece,” “Thought Waves”) actually sound like the work of Howe. For the same price, you could get an entire album of Howe on any one of the Homebrew recordings. So what you have here is a labor of love from a trio of interesting characters whose interests intersect on fabled bridges, the crossing of which you may or may not feel compelled to make.