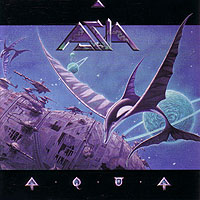 Geoff Downes gave Asia a reboot with Aqua, bringing in John Payne (bass/vocals) and Al Pitrelli (guitars) to flesh out a skeletal crew of Carl Palmer, Steve Howe and guests. (Note: Although Palmer and Howe are billed as full-time members, Howe is only audible on a few tracks and I have no earthly idea which tracks Palmer plays on.) John Payne is a very different vocalist than John Wetton, while Pitrelli isn’t that much different from Mandy Meyer, so it’s easy to get hung up on the vocals with Aqua. While the songs are much better than the professionally penned product found on Then & Now, that would apply to most things, so to give you some useful context I would tell you that Aqua is better than Alpha and not quite as good as Astra. The modern production reminds me a lot of Yes’ Union, which isn’t exactly an endorsement in prog circles. A lot of people didn’t like Union, but a lot of people need to lighten up. What Aqua does effectively is breathe new life into a dying franchise. “Who Will Stop The Rain,” “Heaven on Earth” and “The Voice of Reason” will stand the test of time far better than “Summer (Can’t Last Too Long).” Aqua is guilty of some commercial pandering—“Crime of the Heart,” for example, sounds like reheated Meatloaf—but it generally sticks to the love/war arena-rock blueprint of Asia’s beginnings. Honestly, I would forget about the Palmer/Howe connection, since they contribute little to the final product. Instead, this is all about Downes finding a sustainable way to keep Asia alive and somewhat relevant by mixing new blood and old friends. The cover illustration from Rodney Matthews is also a nice touch, showing that Asia understands the importance of preserving its legacy; a point the new material bears out as well.

The Picayune
John Payne was introduced to Geoff Downes through Phil Spalding, during the recording sessions for GTR’s first album.