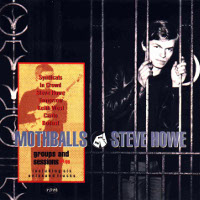 Kronomyth 4.5: YESTERDAY AND TOMORROW. Prior to joining Yes, Steve Howe was busy in a number of bands including the Syndicats (rhythm & blues), The In Crowd (flower-power pop), Tomorrow (psychedelic) and Bodast (early prog). Mothballs is a closet-clearing exercise that provides a nice mini-history of Howe’s evolution leading up to The Yes Album. In fact, the segue is seamless, as the guitar intro for the last track, “Nether Street,” was famously repurposed for “Würm,” the last movement of “Starship Trooper.” For Yes fans, the Bodast tracks at the end will be the most interesting, as they provide a clear link between Howe’s future work in Yes. The earlier material is interesting from an archival perspective, much like listening to Denny Laine-era Moody Blues or David Bowie’s contemporaneous work from the 60s. The Syndicats were also-rans in the British Invasion who released a few singles, including the ambitious “On The Horizon.” The opening track, “Maybellene,” features an eye-opening guitar solo from Steve Howe. The selections from The In Crowd feature better production; a rocking version of Ike Turner’s “Finger Poppin’” is a standout. There are also two instrumental tracks credited to Steve Howe that feature interesting arrangements. With Tomorrow, the music takes a psychedelic turn, which prog fans are probably more amenable to than straight rhythm and blues. “Revolution” has a lot of interesting twists and turns, although it’s hard to hear it today without the mocking commentary of Frank Zappa’s We’re Only In It For The Money in my head. An old B side from Keith West, “The Kid Was A Killer,” signals a new level of musical sophistication, with complex harmonies that invite comparison to The Who. The closing three tracks from Bodast—and, to a lesser extent, the one song from the transitional Canto—will definitely pique the interest of prog fans. It’s on songs like “Beyond Winter” and “Nether Street” that Steve Howe emerges from his chrysalis and we’re treated to early, impressive scratchings at prog’s grand gates of delirium. Mothballs is mostly a history lesson, though, and history can wait.

The Pictures
Photos and memorabilia courtesy of Steve Howe. Design by rpm Productions.