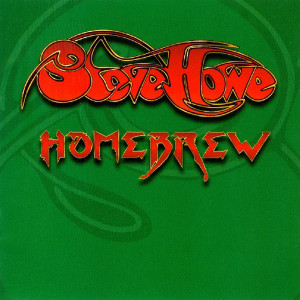 Homemade recordings that go down surprisingly smooth and spawned a brewed of followups.

This is the first sketchbook of studio recordings from Steve Howe, featuring early versions of ABWH songs including “Brother of Mine,” “Birthright” and… wait, come back. I know, Anderson Bruford Wakeman Howe probably isn’t your favorite Yes record. And Steve does sing on this album, which they should really warn you about with some kind of sticker on the cover (e.g., WARNING: No animals were harmed in the making of this record. That’s actually a man singing… poorly.)

Yes is one of my two favorite bands (Jethro Tull is the other), though, so I’ll indulge the man more than most, and can listen to him just play the guitar for hours. If you feel the same way, Homebrew will go down surprisingly smooth. Howe’s home studio is a professional eight-track affair that allows him to multitrack guitars, drums (mostly synthetic) and keyboards to achieve his musical visions—which, it turns out, are pretty close to the final versions we know and love to compare to Yes. I was surprised, for example, to find how much these studio sketches of “Birthright” (“Red And White”), “Brother of Mine” (“At The Full Moon,” “Never Stop Learning”), “Order of the Universe” (“Barren Land”) and “Quartet” (“More About You”) were carried over intact to the final product.

While versions of recent Steve Howe songs and one GTR track (“Sketches In The Sun”) may not curl your proggish toes, an excerpt from “The Revealing Science of God” (“For This Moment”) and “Breakaway From It All” provide a pleasant step back in time and confirm that Howe was a complete songwriter on his own. I had always assumed that the Yes songwriting process was more collaborative in nature, but it appears to have been a piecemeal affair, with Howe cooking up some of the tastiest bits in his own kitchen.