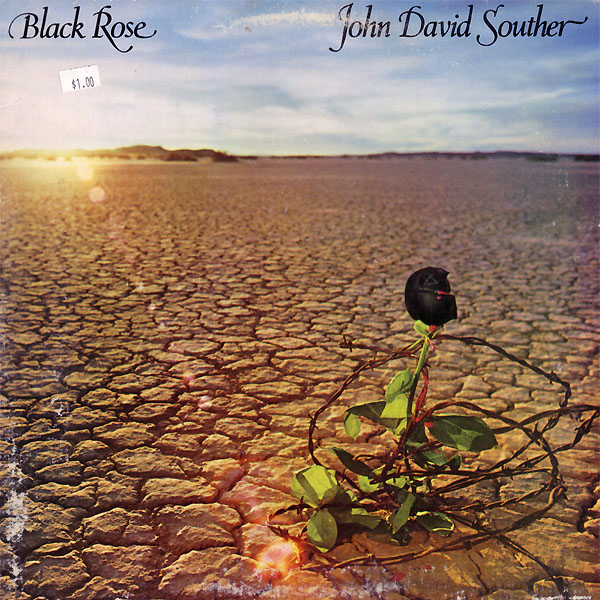 Souther may have feathered his nest with the song royalties from Eagles, but his second solo flight stands on its own.

Kronomyth 2.0: The flowers of Eagles.

John David Souther made a name for himself writing hits for other people. On his second solo album, those names return the favor on a star-studded elpee that includes Don Henley, Glenn Frey, Linda Ronstadt, David Crosby, Peter Asher, Art Garfunkel, Joe Walsh and many more. If you enjoyed the softer side of Eagles, you’ll find plenty of the same, soft country-rock on Black Rose. Souther’s voice isn’t as butter-smooth as Glenn Frey or David Crosby, but it’s at least a tasty margarine most of the time, and the orchestral arrangements sweeten up any sour patches.

Although it didn’t produce a hit single, Black Rose is consistently good from track to track. In fact, listening to this record, it’s hard to understand why SHF didn’t make a better go of it, since Richie Furay and Chris Hillman only needed to show up, given what Souther achieves on his lonesome here. Where his debut was an acoustic country-rock set, Souther rocks a little harder on Black Rose. The obvious reference points for me are Eagles and CSN, not surprising given the players involved. Highlights include “Faithless Love” (popularized earlier by Linda Ronstadt), “Black Rose” (featuring Henley and Frey on backing vocals but sounding mostly like a lost CSN track) and “Banging My Head Against The Moon” (the album’s most upbeat track, with David Crosby and Art Garfunkel on backing vocals), although as I said there isn’t a bad song in the batch.

Will it make you forget about Hotel California? No, of course not. But it’s a better showing than Hillman’s Slippin’ Away and a nice respite from overplaying your Eagles records.