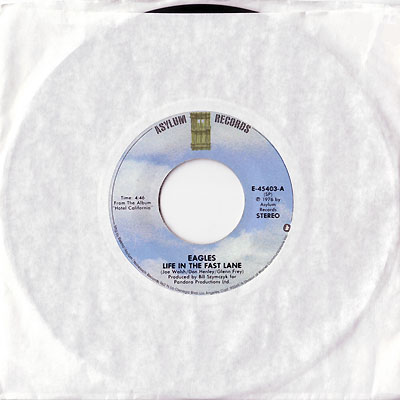 [Kronomyth 6.3]
Eagles at the speed of sound.

Hotel California was the band’s masterpiece. It captured, for generations, the decadence of a decade. Using California as a metaphor for our own troubled social and moral state, Eagles showed a civilization in decline. The third single, “Life in the Fast Lane,” drew its inspiration (according to Songfacts) from a car ride that Glenn Frey had with a drug dealer. The opening guitar riff from Joe Walsh is amp’d up country rock at its finest. The B side, “The Last Resort,” is about man’s destruction of the beautiful world around him (and woman’s destruction of the beautiful world around her too, since we couldn’t do this without you, ladies). There’s a short discussion of Don Henley’s lyrical intent here.