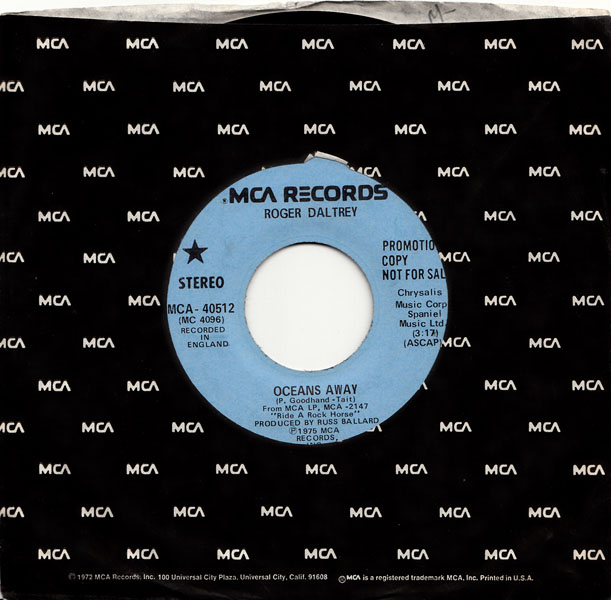 This song became a minor hit for its author, Philip Goodhand-Tait, but not for Daltrey.

All ocean songs are under the aegis of Mother Naiad (hurrah, hurrah), and this being the last (hurrah) in a lovely string of pearls from the Horse’s mouth, it would be unconchable to undervalue it. You’ll say you can live without hearing it and I’ll say you’ve already heard it, in the mournful cry of a ship’s horn that says “I Am” to the sensible emptiness around it and, in its small circumference, vanquishes the vast empire of water. Among the Daltrey ballads, our Centaur/Cynosure, slow in aging, crests the wave of commonplace commodity and leaves behind in Oceans Away the kind of little keepsake worth shelling out 0.99 4.

The B side, Feeling, is written by Paul Korda, a fascinating figure who, among many other things, appeared in the original London cast of Hair, This Is Spinal Tap, Pirates of the Caribbean and performed with Allan Holdsworth (on Metal Fatigue). The song has a fair amount of grit and soul in it, plus an interesting bridge, and is given a passionate and sympathetic performance from Roger Daltrey. Both tracks are from the album, Ride a Rock Horse. The single was only released in the US and failed to chart. Goodhand-Tait released his own version of “Oceans Away” later that same year (see the video below).