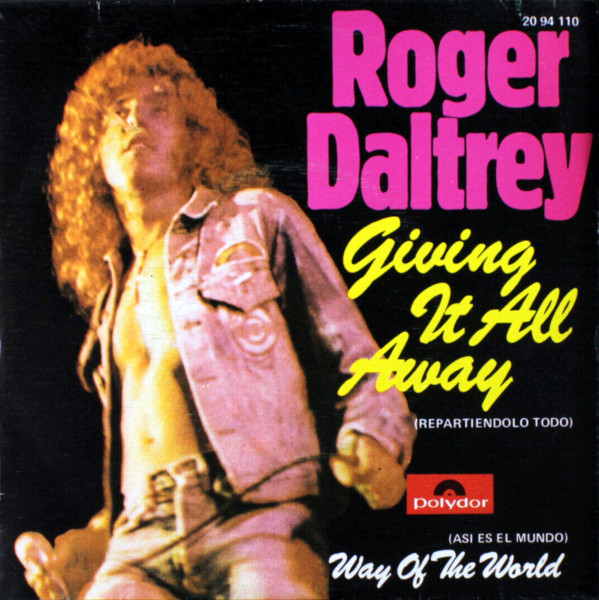 The first single from Roger Daltrey’s long-awaited solo ah, whatever. Tepid stuff from a molten talent.

Roger Daltrey’s first solo album was a conceptual song-cycle about a struggling young musician, written by two then-struggling young musicians (David Courtney and Leo Sayer), produced by England’s teenybopper idol (Adam Faith) and sung by one of the biggest rock stars in the world. Kind of an odd assortment, if you ask me. Maybe it was fate, and maybe it was just a bunch of random sh*t that people rationalized after the fact.

Giving It All Away was released as the advance single from the new album and promptly headed toward the top of the UK charts, where it might have jostled for position with Paul McCartney’s version of “Baa, Baa, Black Sheep” had the man deigned to record such a thing. That by way of saying that any single from Roger Daltrey was bound for a measure of success. Daltrey has since recorded some very good songs on his own, but this isn’t one of them, sorry. This and the B side both feel like way-outtakes from The Who By Numbers.

The Way of the World plods along like a bitter version of “How Many Friends,” with Dave Argus’ fiddle playing probably its most redeeming feature. I really need to work some East of Eden reviews into this site. I didn’t have high expectations for Daltrey as a solo artist. I mean, if he had something to say as a solo artist (as John Entwistle clearly did), we probably would have heard it by now. And the man couldn’t be one of the world’s greatest singers, a surprisingly good actor, impossibly handsome and a talented songwriter. I mean, life is hard enough for the rest of us as it is.