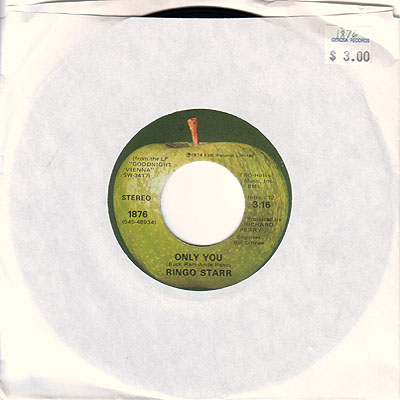 “Everything was sweeter with Harry.” – Van Dyke Parks, as quoted in a 2013 article in The Telegraph.

John Lennon basically handed this hit to Ringo on a silver Platters. John recorded a stylized version that sounded a lot like his Rock And Roll recordings at the time and gave it to Ringo to re-record. Ringo apparently liked the version so much that he kept John’s guide vocals and guitar and simply re-recorded his own version on top of it. If you’ve heard John’s version, you’ll hear that that the two are almost identical; Harry Nilsson’s backing vocals are really the only difference, but what a difference they make! (It’s a wonder Ringo wasn’t shadowed by a small army of backing vocalists all the time: shopping, in the shower, on the phone.) Ringo and Harry also made a music video for this song featuring Ringo in his spaceman costume and Harry Nilsson in a bathrobe. The B side is the elpee track, “Call Me,” a likeable pop song in the mold of “Don’t Pass Me By.” The piano is provided by a young David Foster, who would go on to take over the L.A. music scene in later years.