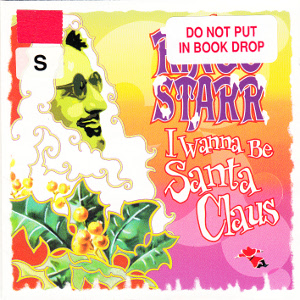 Kronomyth 18.0: FIVE GOLD RINGOS. Best. Beatles. Christmas. Record. Ever. Not that it’s been an historically rich field of endeavor for the Fab Four. Rudolph The Red-Nosed Reggae. Ding Dong Ding Dong. You know what I’m talking about. But it’s always been odd that The Beatles and Christmas, two of the more profitable institutions in our little post-Industrial-Revolution paradise, have never been warmer bedfellows. Ringo generates enough warm feelings for all of them on I Wanna Be Santa Claus. Now, truth be told, my reaction to learning that Ringo had released a Christmas album only one year after Vertical Man was akin to a cold shudder. Upon learning that more of the half of the songs were originals written by Ringo, that shudder got even colder. But the opening “Come On Christmas, Christmas Come On” more than broke the ice—it completely warmed me up to the idea of a Ringo Christmas album. Imagine Gary Glitter singing a Christmas record (and try not to imagine all of the other stuff that comes into your head after that), and you’ll have a good idea of what the opening minutes of I Wanna Be Santa Claus sounds like. That’s followed by a boogaloo version of “Winter Wonderland” that sounds like classic Ringo rock and roll. The rest of the record follows suit, mixing fab originals done in the Vertical Man production style (The Beatles by way of Jeff Lynne and XTC) with smartly re-done classics (no reggae elevator music here). Even that perennial downer, “Little Drummer Boy,” gets a lift from Ringo’s drumming. Co-produced by Mark Hudson and featuring the same core Vertical Man group of Hudson, Jim Cox and Steve Dudas, I Wanna Be Santa Claus could be seen as its twin, a sort of Seasonal Man. For reasons due perhaps to underpromotion, the record got a chillier reception than it deserved (it has since been repackaged as The Best of Ringo Starr: The Christmas Collection under the 20th Century Masters series). If you enjoyed Vertical Man and you also enjoy Ringo Starr and Christmas, you’ll wanna be picking this one up. In some ways, it’s even better than Vertical Man because it has more variety, including a credible country version of “Blue Christmas,” a reggae version of “White Christmas” that runs circles around Paul McCartney’s Rudolph and a very psychedelic closer, “Pax Um Biscum,” complete with tabla and mellotron.