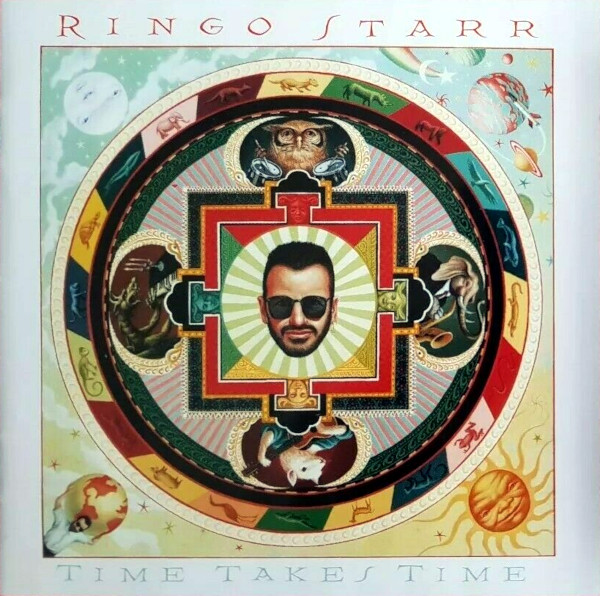 Ringo gets the same starr treatment that George, Tom Petty and Roger McGuinn enjoyed, resulting in his best album in more than a decade.

There was a sort of Beatles/Byrds renaissance happening around this time, with the careers of George Harrison (Cloud Nine), Roger McGuinn (Back From Rio) and Tom Petty (Full Moon Fever) in various states of revival with what were invariably termed their best album since (fill in the blank). In the case of Time Takes Time, the blank was typically Ringo, because apparently no one owns a copy of Goodnight Vienna. Ringo Starr’s career was already in semi-revival thanks to the popular All-Starr Band tours. This time, however, the impressive guests are seated in the producer’s chair: Jeff Lynne, Don Was, Phil Ramone, Peter Asher. Ringo recorded a few tracks with each of them, using material furnished for the most part by professional songsmiths (somehow, impossibly, a Posies cover got in there) that sounded like someone’s approximation of The Beatles and The Byrds circa 1990.

The producers had their work cut out for them in making The Velvet Smog sound good; Ringo hits so many flat notes he’s like a human whack-a-mole. The solution, not surprisingly, is a liberal use of sparkle and spackle. No less than 25 people are credited with background vocals; in other words, it takes a village to raise Ringo’s voice to humanly acceptable levels. My snide comments aside, Time Takes Time is one of the more “fun” Ringo records to come around in years. Songs like “Weight of The World,” “Don’t Know A Thing About Love” and “I Don’t Believe You” are nice vehicles for Ringo, and the rest of the record passes pleasantly enough, even the Ringo originals (which really aren’t the best songs on here).

I’d take the best-record-since-Ringo comments with a grain of salt, however, since Ringo fans tend to be soft critics for obvious reasons. I wouldn’t call it a comeback since so much of the material comes from other people who aren’t named John, Paul or George, but it is nice to hear Ringo getting the starr treatment from the day’s top pop producers. As an added bonus, the Japanese version includes a fine cover of “Don’t Be Cruel,” which I’m sure John would have appreciated.