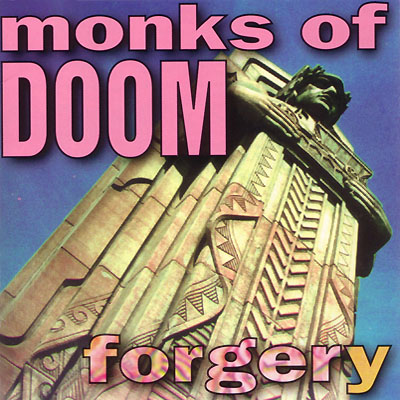 Even on an actual label, they’re still the genuine article where ultra-indie alternative rock is concerned.

Kronomyth 4.0: Oblivion as they rose shrank like a thing reproved.*

Forgery continues to find the Monks’ swamp music telegraphed to the early nineties alternative rock scene. It’s another dark and serious album; you wonder if David Lowery didn’t leave camp with the band’s sense of humor in his backpack. Monks of Doom have plenty of good ideas (nicking XTC’s “Making Plans For Nigel” on “Flow” isn’t one of them), play their instruments with a sense of adventure (including an unexpected electric guitar tango) and Victor Krummenacher’s dour vocals do grow on you over time. In a move of unwarranted optimism, the songs “Flint Jack” and “Virtual Lover” even seem to have been floated as potential singles by IRS, the label (or someone) going so far as to make a music video for “Flint Jack.”

This turned out to be the end of the road, however, with the Monks going into retirement for a while. Yes, it’s a shame that the band never garnered more attention, although their music was always stern and standoffish. Young people didn’t buy records to be lectured on them, and you get the sense on Forgery that Victor Krummenacher is delivering a series of short sermons on the evils and dangers of the world (the reference to the “Reverend Victor Krummenacher” seems to concede the point). As with all of the original Monks album, this is worth owning. I’ve listened to it dozens of times over the years and still find myself humming “Virtual Lover” on occasional, idle moments. For the future, I think the band would well served by a compilation as a way to ease Camper fans into the Monks’ dark monde.

*From “Adonias” by Percy Bysshe Shelley.