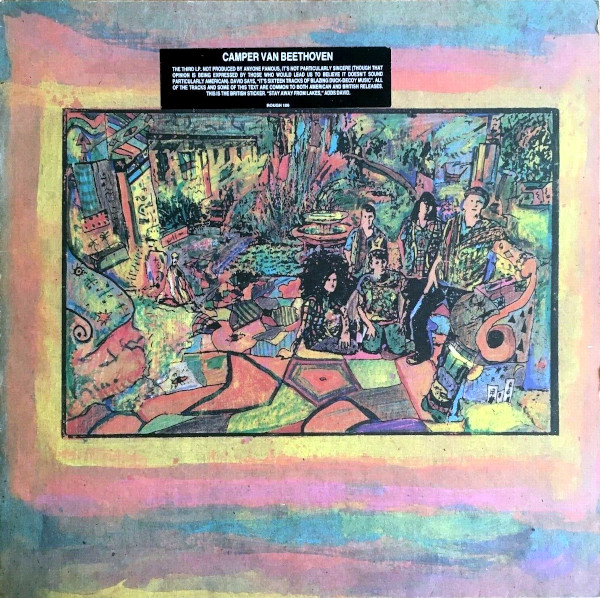 The album where CVB goes from being prickly pranksters to cuddly popstars, or at least cuddly pranksters.

In 1986, after two years of tantalizing speed and power, Eric Davis of the Cincinnati Reds became only the second player in baseball history to record more than 20 home runs and 80 stolen bases in a season. Which may seem apropos of nothing, but I believe that baseball is a suitable analogy for everything. (It has to do with the statistical purity of baseball, which is a long discussion for another day.)

Camper Van Beethoven’s eponymous third album is analogous to Eric Davis’ career: after two years of tantalizing but uneven albums, CVB finally delivered on their potential. The album includes some of their strongest songs so far: “Good Guys And Bad Guys,” “Still Wishing To Course,” “We Saw Jerry’s Daughter.” There’s still a lot of russian folk american country psychedelic punk “stuff” sandwiched in between, but it’s shaped into actual songs this time (okay, well, most of the time anyway) and imprinted with interesting narratives. “The History of Utah,” “We Love You” and “Peace & Love” would fall into the latter category, and I would submit that they’re just as interesting as the proper songs.

I don’t know why CVB finally decided to make a “normal” alternative rock record, but maybe it has to do with that third-time-is-a-charm thing. CVB v3.o is certainly the most charming album they’ve made. The production on the album is also noticeably better, which could be a case of experience, a bigger budget or both. The connection between CVB and the previous generation of classic rockers also becomes clearer, with titular references to Led Zeppelin, a musical nod or two to VU and a swell cover of Pink Floyd’s “Interstellar Overdrive.” For me, this marks the beginning of the band’s best music because, I suppose, I am a melody-loving milquetoast and a middling marxist at best.

A1. Good Guys & Bad Guys
A2. Joe Stalin’s Cadillac
A3. Five Sticks
A4. Lulu Land (Paul MacKinney)
A5. Une Fois
A6. We Saw Jerry’s Daughter
A7. Surprise Truck
A8. Stairway To Heavan (sic)
B1. The History of Utah
B2. Still Wishing To Course
B3. We Love You
B4. Hoe Yourself Down
B5. Peace & Love
B6. Folly
B7. Interstellar Overdrive (Syd Barrett/Roger Waters/Rick Wright/Nick Mason)
B8. Shut Us Down

All songs written by Camper Van Beethoven unless noted.

The following is verbatim from the back cover: Victor Krummenacher (bass, vocals & cake decoration), Greg Lisher (guitars & guitar solos of enduring beauty and great strength), David Lowery (guitar, vocals, steel guitar & pantomime horse (actually ½ of pantomime horse)), Christopher “Rat Television” Molla (pedal steel guitar, guitar, vocals, hairstyles and actually won Madonna look-a-like context again), Crispy Derson (How can I begin to tell you of Crispy Derson? Crispy Derson they legendary drummer! Crispy Derson the wearer of wigs! It is said by many that he resembles much Rasputin many when he plays on his dum-bek), Jonathan Segel (guitars, bass (I think!), and anything you hear on this record that is not a guitar or drum. He also wore false nose and moustache glasses.), Eugene Chadbourne (genuine psychedelic guitar solos, banjo, and leaving one dirty sock in Albuquerque), Soviet Spys (swim upstream disguised as trout). Produced by Camper Van Beethoven; engineered by Tom Fox.

Released on elpee and cassette in August 1986 in the US (Rough Trade, PITCH-A-TENT 02 / PITCH 02C) and the UK (Rough Trade, ROUGH 109). Cassette features a different cover. Also released as Camper Van Beethoven III on white vinyl elpee in 1986 in Germany (Full Blast/Line, FBLP 4.00279) with the same LP cover as the US version.